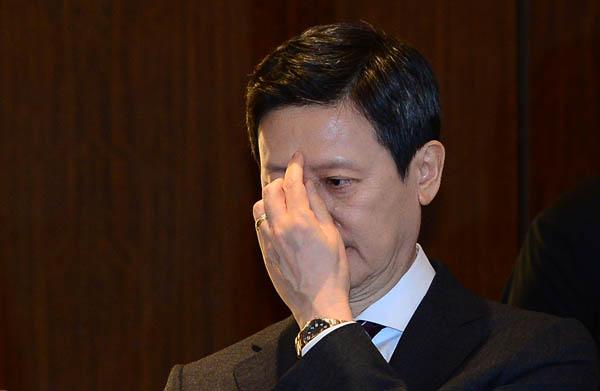 Lotte Group’s fraternal battle over control of the conglomerate reignited on Thursday, as Shin Dong-joo, the vanquished eldest brother of the founding family, filed lawsuits against younger brother Shin Dong-bin over his control of Lotte Holdings, the de facto holding company of Japan’s Lotte Group.

The elder brother said during a press conference that he has launched a legal battle in both Japan and Korea to nullify the decision to dismiss their father and Lotte Group founder Shin Kyuk-ho from the board of the holding company.

Shin Dong-joo also filed a damages suit in Korea against Hotel Lotte, seeking 1.2 billion won ($1 million) for the ousting of their father.

Hotel Lotte, led by Shin Dong-bin, is at the top of Lotte’s Korea operations.

The board of Lotte Holdings voted in July to remove Chairman Shin Kyuk-ho, 92, from his post on the board after the chairman attempted to dismiss six board members, including Shin Dong-bin and Lotte Holdings CEO Takayuki Tsukuda.

Shin Dong-bin, 60, currently has control of Lotte Group’s operations in both Korea and Japan.

The lawsuits will deal a blow to the already beleaguered conglomerate, as the publicized family feud has exposed Lotte’s murky corporate governance structure. Chairman Shin Dong-bin was even called to the National Assembly to give a public apology.

The elder brother said the process of dismissing the founder was not only illegitimate, but also morally unacceptable.

“Shin Dong-bin illegally took away his father’s rights and position at Lotte Holdings out of greed,” he said through a statement read in Korean by his wife. Shin Dong-joo is not fluent in Korean, as he was born and raised in Japan.

“This is an unsavory action from a moral perspective, as the son kicked out his father and founder, who developed the group from scratch,” the statement read.

Shin Dong-joo held a press conference under the title of chairman of SDJ Corporation.

The corporation is a new Korea-based unit of the group headed by the eldest brother.

He also said his larger number of shares in key units will help him get an upper hand in the battle.

Korea’s Lotte Group expressed regret over the reoccurring tit-for-tat fights and downplayed the impact of the legal action.

The group said the dismissal of the founder was carried out legitimately through the decision-making process of shareholders and board members.