Busan’s commercial side thrives too

Busan’s commercial side thrives too 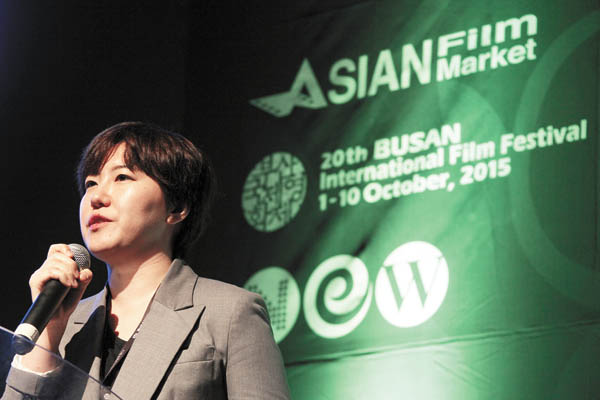 The first Entertainment Intellectual Property Market (E-IP Market) was held from Saturday to Tuesday in Busan as part of the Asian Film Market, which included pitching events, forums and seminars. A presenter pitches an animation project titled “The Underdog” produced by local animation studios Odoltogi and Dream Search C&C on Sunday during the E-IP Pitching session, which won the top prize. Provided by Busan International Film Festival

BUSAN - Renowned filmmakers and cineastes from around the world come to the Busan International Film Festival to screen films and talk about craft and art at discussion sessions.

On a parallel track, people in the film industry also attend the annual Asian Film Market to talk about the business side. Global industry players and filmmakers gather to talk about their next projects and possibly ink deals with potential investors.

Although it is only half as old as the BIFF, which celebrated its 20th anniversary this year, the 10-year-old Asian Film Market is gradually developing a foothold in the industry as shown by the increase in the number of booths. From 198 last year, the number reached 208 this year.

This year’s Asian Film Market showed several attempts to reflect fast-changing trends in the entertainment market. The one that stood out the most was the first edition of Entertainment Intellectual Property Market (E-IP Market).

Sponsored by Next Entertainment World, one of Korea’s major distributors, it is the first market of its type in the world where any original story can be bought and sold for adaptation in various kinds of media platforms.

At an introductory event on Sunday at Bexco Hall in Busan, next to the BIFF’s main venue of Busan Cinema Center, 10 creators pitched ideas to potential investors and collaborators, most of whom were from Korea or China.

As it was a test event, the presenters were limited to creators from Korea.

The pitched projects ranged from already-made web cartoons and Internet novels to a raw film screenplay and animations still in the production process. All the participants showed strong determination to adapt the original source idea to a different media format.

Among the presenters were local entertainment guru iHO, which pitched a short web drama series “Nightmare High,” a fantasy thriller in which a high school teacher buys the souls of students in exchange for solving their individual problems.

Local web drama production company Kirin Production pitched their 2014 web drama “Momo Salon,” which starred Lizzy from Orange Caramel as the bubbly, optimistic Hyeni, who strives to run her own hair salon. Kirin wants to adapt its original story into Chinese, replacing the hair salon with a western dessert cafe in the back alley of a Chinese city.

Co-produced by local animation studios Odoltogi and Dream Search C&C, “The Underdog” was another project that was presented.

The story follows a group of abandoned dogs going on an adventure to start living in a human-free demilitarized zone.

The companies have finished developing the characters and are in the process of producing storyboards with a plan for release in 2017.

Having developed the characters, the companies were open to adapting them for games.

Participation by big media industry players such as KBS Media and Naver Corporation. demonstrated the growing importance and potential of adapting original works to various platforms and for various markets.

Jay Choi, director of Warner Bros. Korea-Local Production, said the newly-launched market will act as a channel for incomplete work to gain commercial value. He made his remarks during the E-IP forum, the first of its kind, held on Saturday.

However, Choi also expressed concerns that commercializing a raw idea might jeopardize the original storyteller’s right to participate in the latter development process of the idea.

Choi emphasized that in order for this beta market to thrive in the future, “It would need to figure out how the buyers are going to compensate the creators for their original content.”

Jeong Taesung, CEO of CJ E&M’s film buisiness, agreed with Choi, saying, “Although the prospects for the market are positive, we will need to figure out how they are going to define the ownership of the content once the source is opened to the market and also define how the original creator is going to get protected.”

After the pitching event, Kirin Production was able to pull off the first deal with China’s Beijing Alpha Transmedia for a Chinese adaptation of its 2013 web drama “The Cravings.” After selling the rights to the Chinese production company, the two companies will collaborate to produce the Chinese version of the drama.

The top prize for the E-IP Pitching event titled “New Creator Award” went to “The Underdog” on Tuesday, and it received a total of 10 million won for future development.