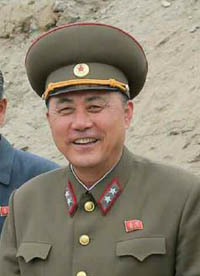 Ma Won-chun, a top aide to North Korean leader Kim Jong-un who was believed to have been purged for allowing a bad renovation of an airport, was seen for the first time in a year on Thursday on Pyongyang’s state-run Korean Central News Agency (KCNA).

South Korea’s National Intelligence Service (NIS) said in May that Ma, the director of construction at the powerful National Defense Commission, was purged and forced to work on a farm in Yanggang Province with his family.

The three-star general was reportedly ousted after Kim complained last November about the renovation of Sunan International Airport, saying it did not adequately reflect the country’s “Juche” ideology.

Juche, or self-reliance, is North Korea’s quintessential self-sufficient political and economic ideology, first introduced by the country’s founder and late leader Kim Il Sung (1912-1994). Opened on June 24, the airport was one of North’s most recent high-profile construction projects.

The KCNA reported that Ma accompanied Kim on a recent trip to Rason to examine how the North Korean city was recovering from Typhoon Goni.

Located in the Rason Special Economic Zone bordering China and Russia, Rason was hit by a massive flood on Aug. 22, leaving at least 40 people dead and affecting more than 11,000 inhabitants, according to the International Federation of the Red Cross.

The dispatch failed to mention the date of the visit or Ma’s current rank, but local media reported that he seemed to have been demoted to a two-star general, referencing the badges on his military uniform.

The KCNA ran a set of images featuring a smiling Kim touring the city with his close aides, citing the young leader as saying that he had decided to visit Rason among all other destinations because it would “relieve” him to see how construction on new houses was coming along.

During a key meeting with top military officials in late August, Kim reportedly ordered that Rason be fully restored ahead of the 70th anniversary of the founding of the Worker’s Party, which falls on Saturday.