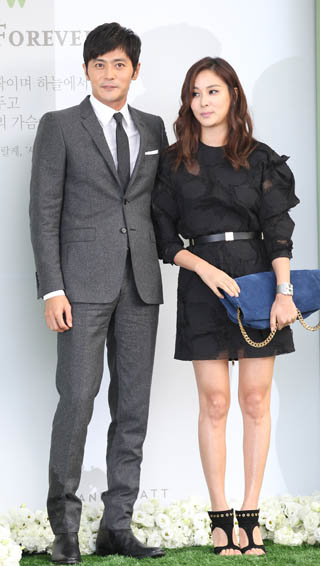 Celebrity couple Jang Dong-gun and Ko So-young recently donated 100 million won ($86,095) to go toward helping single mothers and babies to be put up for adoption.

The Social Welfare Society said on Thursday that Jang and Ko paid a visit Monday to the headquarters of the charity, located in Nonhyeon-dong, southern Seoul.

The couple have donated to the Social Welfare Society since 2010.
Ko also volunteers with her fans at children’s shelters.

The pair wed in 2010 and had their first child the same year. Afterward, Ko told multiple local media outlets that motherhood had prompted her interest in the welfare of children and single mothers.

The actress gave birth to her second child last year and is reportedly reviewing scripts in preparation to return to the silver screen next year.

Jang and Ko both began acting in 1992, soaring to stardom upon their debut.

They first met on the set of the 1998 film “Love Wind Love Song” and remained friends for more than 10 years before they started dating in 2007.