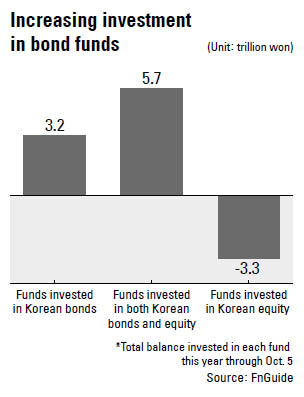 When interest rates rise, bonds lose value, and this relationship is giving many bond fund investors a headache about whether to sell.

If the benchmark rate goes up, bonds become cheaper, leading to lower earning in the funds. Speculation is high that the U.S. Fed would raise its key policy rate within this year, which Korean central banks would likely follow. Some analysts warned against investing in bonds as a result.

But the markets are responding differently than expected. As of Oct. 5, more than 9 trillion won ($7.7 billion) has been invested in bond funds this year, according to the FnGuide, a financial information provider.

The reason seems to be investors’ preference for safer assets, as the latest data shows the global economy still struggling, which could mean another rate cut or freeze by the Fed.

Treasury bond yields, which started to decline in the second half this year, continued to hit new lows last month. On Sept. 30, the 3-year treasury bond’s annual yield reached 1.568 percent to its lowest level ever, down from 1.674 percent just 20 days ago.

On Sept. 5, the yield on a 5-year treasury note also fell to 1.721 percent, a record low. The 10-year government bond yield was down to 2.042 percent, its bottom in recent years as well, which dropped the yield of 3-year corporate bonds with an AA- credit rating by 0.07 percent from last month.

The plunge in treasury bonds’ yields also pushed down other bonds.

In response, the International Monetary Fund lowered its forecast for Korea’s growth to 2.7 percent on Oct. 6, from its earlier projection of 3.1 percent.

Korean authorities also presented a gloomy outlook. Bank of Korea Chief Lee Ju-yeol said at a hearing for lawmakers at the National Assembly on Oct. 5 that “this year’s growth will not be far from the range we anticipated,” referring the central bank’s latest forecast of 2.8 percent.

A sluggish economy increases anticipation of further quantitative easing policy by the central bank. Traders are also betting less on a drop in bond prices, which means a raise in the benchmark rate.

“When the economy slows down and the outlook for growth drops, anticipation for another rate cut gained lots of support, and most of the anticipation became realized,” said Park Dong-jin, a futures analyst at Samsung Securities. “Yields on bond could slide further in the future.”

“There is perception that the world economy is still faltering as growth in China and emerging markets is slowed, pushing the U.S. Fed’s postponement on a rate hike,” Park said. “Korean treasury bonds are emerging as safer assets, even for foreigners.”

Worries still linger over capital outflow from Korean equity market if the U.S. rate is raised.

“Usually, between November and December, yield on bond is rising due to reduced transactions,” said Park, from Samsung. “In the midst of uncertain outlook for global growth, investors should reduce risks by dividing investment on short-term and long-term bonds.”