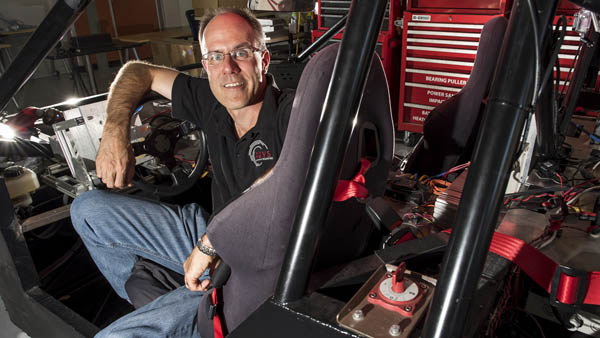 Chris Gerdes, a professor of engineering at Stanford University and automated-car expert. [BLOOMBERG]

It’s nothing more than a dune buggy on a cordoned-off street, but it’s headed for trouble. A jumble of sawhorses and traffic’ cones simulates a road crew working over a manhole and the driverless car has to make a decision - obey the law against crossing a double-yellow line or break the law and spare the crew. It splits the difference, veering at the last moment and nearly colliding with the cones.

“I imagine that wasn’t the most comfortable experience for you,” Chris Gerdes, a boyish and bespectacled Stanford engineering professor, calls out to the slightly shaken passenger in the car.

Gerdes is suddenly causing a great deal of discomfort to automakers and tech giants. Raised in North Carolina in the shadow of the Charlotte Motor Speedway, he has been at the enthusiastic forefront of the driverless car movement, monitoring the brains of top racecar drivers in action and programming cars to imitate them. He and his students have programmed their Audi race car, Shelly, to flawlessly make the 153 turns on the 12.4 miles of the Pikes Peak trail in Colorado - with no one at the wheel.

But as the autonomous car movement barrels ahead, Gerdes has gone from enthusiast to conscience, if not quite scold. He is raising questions about ethical choices that must inevitably be programmed into the robotic minds expected one day soon to be driving along the nation’s highways. And since Gerdes, who favors bluejeans and straight talk, is no tweedy Luddite railing against the evils of technology, the industry is paying attention.

“Within the autonomous driving industry, Chris is regarded as Switzerland, he’s neutral,” said Patrick Lin, a philosophy professor at Cal Poly who spent a year working with Gerdes in his 7-bay garage filled with robot cars. “He’s asking the hard questions about ethics and how it’s going to work. He’s pointing out that we have to do more than just obey the law.”

On a recent day, Gerdes met separately at his lab with the chief executive officers of General Motors and Ford Motor. That came about a week after he hosted a workshop on driverless ethics for 90 engineers and researchers, including from electric carmaker Tesla Motors Inc. and tech giant Google Inc., which has pledged to put out a robot car as soon as 2017. This year, Tesla will introduce an auto-pilot feature. GM will debut a 2017 Cadillac that drives hands free. Ford CEO Mark Fields says driverless cars will arrive by 2020.

Gerdes’ message: not so fast.

“People often say the technology is solved, but I don’t quite believe that,” he said in the conference room as his students nearby buried their heads under the hood of an autonomous Ford Fusion nicknamed “Trudy.” “There’s a lot of context, a lot of subtle, but important things yet to be solved.”

Take that double-yellow line problem. It is clear that the car should cross it to avoid the road crew. Less clear is how to go about programming a machine to break the law or to make still more complex ethical calls.

“We need to take a step back and say, ‘Wait a minute, is that what we should be programming the car to think about? Is that even the right question to ask?’” Gerdes said.

Gerdes, 46, who is training to be a racecar driver, was initially dismissive of the need to grapple with philosophy. Autonomous cars programmed with robot reflexes and precision were on track to drastically reduce the 33,000 U.S. highway deaths a year. Wasn’t that moral enough? But then three years ago George Bekey, co-author with Lin of a book entitled “Robot Ethics,” e-mailed Gerdes.

“My first thought was, ‘Ethics? Automated Cars? This seems like a bit of a fringe topic’,” Gerdes said.

He soon came to see both its significance and its painful complexity. For example, when an accident is unavoidable, should a driverless car be programmed to aim for the smallest object to protect its occupant? What if that object turns out to be a baby stroller? If a car must choose between hitting a group of pedestrians and risking the life of its occupant, what is the moral choice? Does it owe its occupant more than it owes others?

When human drivers face impossible dilemmas, choices are made in the heat of the moment and can be forgiven. But if a machine can be programmed to make the choice, what should it be?

“It’s important to think about not just how these cars will drive themselves, but what’s the experience of being in them and how do they interact,” Gerdes said.

But it’s clear that as he raises hard questions Gerdes believes in his quest.

“With any new technology, there’s a peak in hype and then there’s a trough of disillusionment,” Gerdes said. “We’re somewhere on that hype peak at the moment. The benefits are real, but we may have a valley ahead of us before we see all of the society-transforming benefits of this sort of technology.” Bloomberg