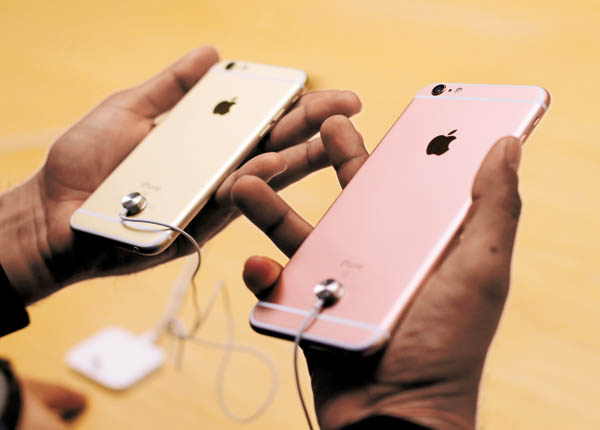 A customer compares the colors of a new Apple iPhone 6s at an Apple store on Chicago’s Magnificent Mile. Korean fans now have a sales date to get their hands on the latest Apple products. [AP/NEWSIS]

Apple will launch sales of its iPhone 6s and 6s Plus in Korea on Oct. 23, six weeks after the American giant unveiled its latest lineup of products.

All three mobile carriers - SK Telecom, KT and LG U+ - will accept preorders from Oct. 16, a week before offline sales begin.

Apple’s new phones are $100 more expensive than the iPhone 6 and 6 Plus models launched last year.

The hefty pricing by Apple goes against the current trend in Korea where smartphone producers are dragging down prices as the smartphone market reaches near-saturation point.

“Korea’s smartphone market is quickly shifting its competition focus to pricing,” said a spokesman with one of three mobile services. “It will be very interesting to see if Apple will be able to continue driving its fans to purchase iPhones here even at such high costs.”

Following Apple’s Thursday announcement, Korea has for the first time been included in the second batch of countries to see the latest iPhones arrive in their market.

The home ground of Apple’s archrival Samsung has been among the third-batch of countries to get the release ever since the KT exclusively brought the iPhone 3 and iPhone 3GS in 2009. That means it always took nearly two months before Korea’s Apple fans go their hands on saw the latest iPhones.

Apple said on Sept. 28 the iPhone 6s and 6s Plus will ship to 40 countries and territories starting on Oct. 9, followed by additional rollouts on Oct. 10 and Oct. 16. The three dates are considered a single, second-batch. The Oct. 9 nations were mostly Europe and several Middle Eastern countries were scheduled for Oct. 10. India, Malaysia and Turkey were scheduled for Oct. 16 and Korea was apparently added after the Sept. 28 announcement.

Asian countries that were part of the initial batch scheduled for Sept. 25 included Japan, China, Singapore and Hong Kong.