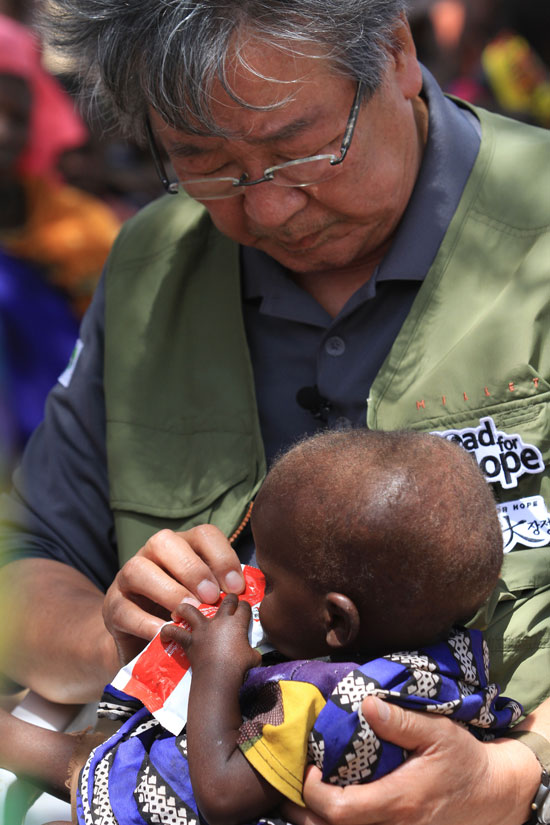 Choi Bool-am, the chief of sponsor to Child Fund Korea, feeds a 6-month-old baby in July in Turkanya, Kenya. The child was in critical condition and suffering from malnutrition and tuberculosis. Provided by the Child Fund Korea

Award-winning actor Choi Bool-am is recognized for his immense talent, but these days his volunteer work has also garnered attention.

Recently, the 75-year-old has actually spent more time serving as the chief sponsor for Child Fund Korea than he has acting.

Choi was drawn to help children in need 30 years ago, after starring in the mega-hit MBC drama series “Lifetime in the Country” (1980-2002).

In the show, Choi’s character adopted a child, and the actor was praised for his portrayal as well as the character’s fictitious actions. But believing that he received undeserved applause, Choi made up his mind to support children in real life, an effort that continues today.

This year, he volunteered in Kenya for nine days from late June to early July. The aim there was to help install water tanks and pumps in a village that lacked food and proper access to water due to drought.

Choi has also assisted in emergency relief efforts for children suffering from malnutrition, disease and exploitation.

“I made the visit because I wanted to go on what may be my last volunteer trip before I get any older,” he said. A TV special on his trip to Kenya airs Saturday on KBS.

The JoongAng Ilbo recently sat down for an interview with the veteran actor to discuss his time in Africa. The following is an edited excerpt:

Q. Were you not concerned about volunteering in such a remote area?

A. Actually, I was pretty concerned due to my age. I was knocked out after receiving five vaccinations aimed at preventing tropical disease.

However, since Korea has gone on to achieve tremendous development thanks to foreign aid, I believe it is now our turn to give back to other countries. I made up my mind to leave for Kenya after realizing that this might be my last chance to go to such a remote place [to volunteer].

How did you feel after seeing the children in Kenya?

First, I went to a dumping ground near the country’s capital, Nairobi. Before I arrived at the site, I imagined the place to be similar to the Seoul’s previous landfill on Nanji Island in western Seoul. When I arrived there, however, I realized that our waste is, in fact, wealthy. My whole world felt like it was collapsing seeing those children searching for food in such filth. The situation wasn’t much better in Turkana, which is about a two-hour flight from the capital. All the children in the village were in despair.

What was the most heartbreaking moment for you?

I vividly remember the eyes of 12-year-old Maina, who I met at the landfill. The child searched for food the entire day, only to find nothing. I also remember many children in Turkana feeling excited about the new water pumps but not being able to express that joy due to a lack of energy.

Was there any difference in how you felt before and after you visited Kenya?

Once again, I feel that I’m a happy person, especially after witnessing such a desperate place where tears are considered extravagant. Sometimes when I feel tired or overworked, I often think about Kenya. I wish other people realized that there are still so many children who need our help [and understood] the importance of the water and trash they so thoughtlessly throw away.

Is there anything that you want to achieve?

I once watched the kotjebi, the homeless, orphaned North Korean children, on television. After seeing them on the news, I thought I must help those children one day. I tried to visit North Korea numerous times but all my attempts failed. I’d be willing to do anything if I could only help those children.