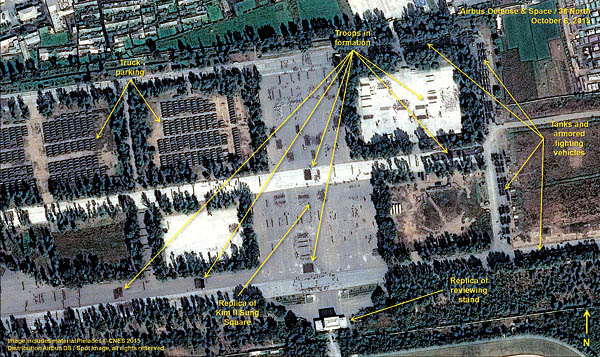 This image provided by the U.S.-Korea Institute at the Johns Hopkins School of Advanced International Studies, taken Tuesday, shows military vehicles and troops mobilized in Pyongyang ahead of a major military parade marking the 70th anniversary of North Korea’s ruling party. [AP/NEWSIS]

A Chinese delegation led by Liu Yunshan, a member of the top-decision making body of the country’s Communist Party, arrived in Pyongyang on Friday to attend a variety of ceremonial events commemorating the 70th anniversary of North Korea’s ruling Workers’ Party.

China’s Xinhua News Agency reported that Liu’s delegation landed in Pyongyang on Friday on a four-day trip to attend activities to commemorate the founding of the Workers’ Party which falls today.

Liu is scheduled to meet with North Korean leaders to discuss bilateral issues of common interest, the state-run media outlet reported, without elaborating on when or with whom.

The report on the Chinese delegation’s arrival has led to speculation that the two traditional allies are working on improving ties following years of soured relations.

Liu’s visit marks the first time a member of the powerful Standing Committee of the Political Bureau of the Communist Party has been to Pyongyang under the leadership of the young Kim, who took power following the death of his father, Kim Jong-il, in December 2011.

A diplomatic source in Beijing who requested anonymity told the JoongAng Ilbo that the fact that Liu was on a four-day trip implied that both sides had reached agreements on a number of bilateral issues and that Liu might possibly get to meet with Kim.

Relations between North Korea and China began to fray after Pyongyang conducted its third nuclear test in February 2013.

Kim’s ouster and execution of his uncle, Jang Song-thaek, once considered the second-most powerful man in the regime, later that year was also thought to have infuriated Beijing, as Jang had a strong rapport with Chinese officials.

While a detailed schedule for Liu and the delegate has not been disclosed, it is expected they will attend the massive military parade scheduled Saturday to mark the Workers’ Party anniversary.

Analysts and observers previously brushed aside concerns that Pyongyang would opt to launch a long-range rocket during the event, though it is expected that it will unveil new military equipment during the parade.

The website 38 North, which specializes in North Korean affairs and is run by the U.S.-Korea Institute at Johns Hopkins University’s School of Advanced International Studies (SAIS), noted recent satellite imagery taken Tuesday which shows that Pyongyang has mobilized “approximately 800 tents, 700 trucks and 200 armored fighting and military vehicles” in preparation for the parade this weekend. Kim will preside over the spectacle.

The North, it said, appeared to be preparing for “one of the largest military parades” in its history.