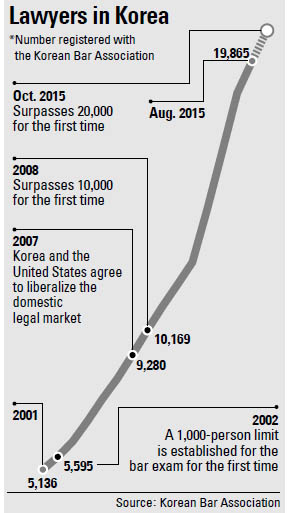 Mr. A, who has worked for a local law firm for a decade now, believes there are threats more pressing to the legal industry than the imminent liberalization of Korea’s legal service market to E.U.-based law firms.

From March 2016, a free trade agreement with the European Union will allow foreign law firms to form joint ventures with Korean partners and hire Korean lawyers, the last of three transitional stages that began when the FTA went into effect in 2011.

But that’s not what most worries Mr. A, who asked that his name be withheld.

The number of lawyers in Korea will soon pass 20,000 for the first time, he pointed out, adding that he fears the increased competition in the country’s already-packed legal industry will only spiral out of control with his paycheck taking a hit.

“I often have to promise my clients free legal services when I’m trying to obtain a high-profile case,” he said, referring to domestic conglomerates. “I even heard that some small and midsize law firms offer free consultations in merger and acquisition deals.”

With companies here nowadays relying more on an open-bidding system in selecting law firms ? a drastic change from the past when the use of personal connections were preferred many law firms lament they no longer have the upper hand in making those deals.

And as attorneys like Mr. A brace themselves for the rise of 20,000-strong job market by the end of this month, many admit that their pride isn’t as lofty as it used to be.

“Professionalism and communication are two very crucial abilities we seek in hiring a law firm for a corporate case,” acknowledged the director of the judicial affairs team at a local financial company, requesting anonymity. “But once you have bidders that are neck-and-neck, it all comes down to who offers the better rate.”

“In this business, we call it ‘law firm shopping,’” he added.

Data provided by the Korea Bar Association shows that 3,404 of the 16,502 licensed lawyers, or 17.1 percent, were temporarily out of work by late August, the highest percentage yet.

An insider from the group said many couldn’t afford basic expenses. Some who shut down their personal offices opted to work from home or rent a studio apartment and pay as little as 350,000 won ($307) per month for maintenance fees.

Mr. B, a 50-year-old lawyer with over 15 years of experience running his own office in Seocho-dong, southern Seoul, was so desperate for money that he borrowed 20 million won from his client last year and used it for his rent and his employees’ salaries. The money was a retrieved loan he legally battled for his client in trial.

The client, who hasn’t received the money from Mr. B yet, recently filed a petition with the Seoul Bar Association.

“We used to receive complaints from people saying their lawyers missed the period for filing an appeal,” said Byun Hwan-bong, the secretary general of the Seoul Bar Association. “Now, people are calling to report broken money deals, how their lawyers aren’t paying back loans or stole their deposits in court.”

With companies now hiring their own lawyers as in-house counsels, and entrusting them with work that was formerly covered by law firms, those excluded have complained even more.

Of the near 20,000 lawyers licensed with the Korea Bar Association, roughly 3,000 are in-house counselors. A decade ago, that figure stood between 200 and 300.

“The increase in the number of in-house counselors has broadened their roles to a new level,” said Baek Seung-jae, the head of the Korea In-house Counsel Association, adding they now take charge of most corporate legal counseling.

In the past, these roles were limited to reviewing legal contracts or doing the legwork for law firms in trials.