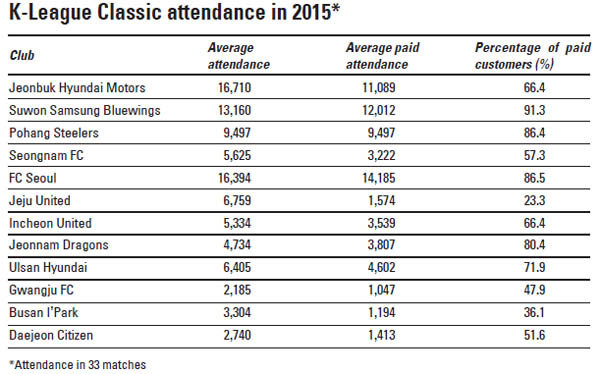 Clubs in the K-League Classic saw their average attendance fall last year, but there’s a silver lining: more fans are now purchasing their tickets rather than attending on freebies, according to the league office.

Ahead of the clubs playing their first matches in the split system next weekend, the league unveiled last Thursday the attendance record for each team in the previous 33 matches, including the number of attendees who actually purchased their own tickets.

The nation’s top professional football league saw an average 7,770 fans visit each match, down 161 from last year. But the league saw the number of paid visitors grow. Last year, only 63.2 percent of match attendees actually bought their own tickets.

This year, 71.5 percent at the stadium paid their way.

Among the league’s 12 clubs, the Suwon Samsung Bluewings had the highest percentage of paid attendees. The club, which currently sits second in the league, had an average 13,160 fans coming to its stadium per match. Among them, 91.3 percent, or 12,012, typically paid for their seats.

Suwon is the only club in the K-League, including the second-division K-League Challenge, for which paid visitors account for more than 90 percent of total attendees.

Suwon last year had an average 19,608 fans attend each match, but only 73.6 percent typically paid.

The club announced earlier this year that it would reduce the number of free tickets, which forced team officials, as well as players and their families, to actually pay for their seats.

Ulsan Hyundai, currently in ninth place, made big improvements this year in bringing paying fans to its matches. The club saw 6,405 fans on average, and among them, 71.9 percent purchased tickets. Last year, Ulsan averaged 7,032 fans per match, but only 37 percent, or 2,603, had actually paid themselves.

Seongnam FC, which is sitting fourth, also made big improvements, seeing its average paid visitors spike from 27.2 percent to 57.3 percent.

Defending champion and league top Jeonbuk Hyundai Motors has brought in the most fans this year, averaging 16,710 per match, beating last year’s numbers by 3,555. The proportion of paid customers was 66.4 percent, up from last year’s 55.6 percent.

FC Seoul, which sits fifth, had the second-highest average attendance at 16,394, but it had the most paying attendees, averaging 14,185. Paying fans accounted for 86.5 percent of the crowds on average, which is second only to Suwon.

Among K-League Classic clubs, the worst performer was Jeju United. The team had an average attendance of 6,759 fans per match, but only 1,574, or 23.3 percent, actually bought tickets. Busan I’Park and Gwangju FC also saw more than half of their fans at the stadium attend with free seats.

The average attendance for K-League Challenge matches was 1,627, with 44.7 percent of them purchasing tickets. Last year, the league’s overall attendance averaged 1,211, with 62.3 percent paying for their seats.

Daegu FC had the most visitors on average at 2,643, but K-League data showed 81.2 percent attended on free tickets.