With Bae’s loss, tie slips away from int’l squad

With Bae’s loss, tie slips away from int’l squad 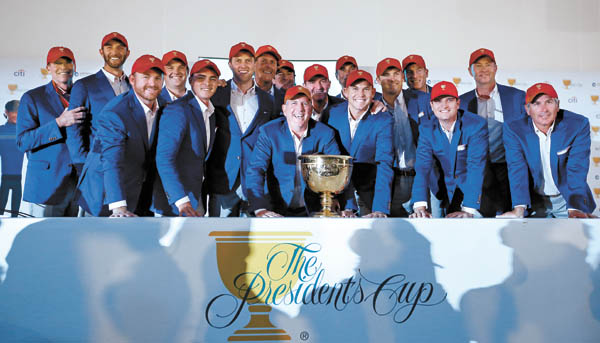 U.S. Team captain Jay Haas, front center, poses with his team after they defeated the International Team 15 1/2 to 14 1/2 to retain the Presidents Cup at the Jack Nicklaus Golf Club Korea in Incheon on Sunday. [AP/NEWSIS]

INCHEON - Bae Sang-moon had lot on his shoulders going into this year’s Presidents Cup. Not only was he the only Korean playing in the biennial golf tournament held in his home country, but the Presidents Cup was probably his last event before he enters his mandatory military service.

Things got even tenser for Bae on Sunday, when he found himself with the fate of the International Team in his hands.

With a supportive hometown crowd cheering him on, Bae came close to becoming the tournament’s hero. But after his third shot missed the green on the 18th hole, Bae bent over and wiped his face.

He realized his best hadn’t been good enough.

The United States now leads the overall head-to-head record against the International Team in the Presidents Cup at 9-1-1, with six straight wins. 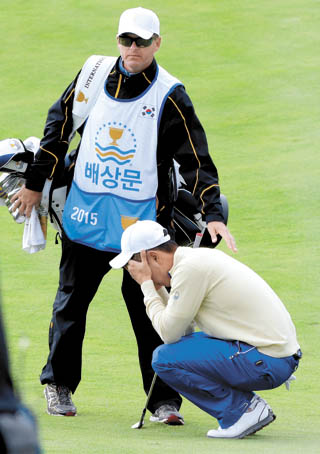 Bae Sang-moon is consoled by his caddie Matt Minister on the 18th green during his singles loss to the United States’ Bill Haas at the Presidents Cup at the Jack Nicklaus Golf Club Korea in Incheon on Sunday.

The International Team hasn’t won the cup since 1993.

“Couldn’t even have dreamed this,” U.S. Team Captain Jay Haas said after confirming his team’s victory. “I’m just real happy for the guys.”

The fates of the U.S. and International Teams were all decided on the final hole of the final match of the 12 singles matchplay amid wind and rain on Sunday.

Squared off at 14 1/2 each, the U.S. and International Teams were left with players who were criticized as controversial picks for this tournament.

Bill Haas is the son of U.S. Team captain Jay Haas and had the lowest world ranking among Americans at No. 29, while Bae, who is ranked No. 88 - the lowest among all players - was investigated by the police for violating laws related to his military conscription before coming to the tournament. Both were selected through captain’s recommendation.

Haas, who was playing in his third Presidents Cup, never allowed Bae to lead, staying 1-up before entering the last hole. Although he could have sealed a victory for the United States in the par-3 17th hole, Bae managed to stay alive by making a good escape from bunker to finish with a par.

Entering the par-5 18th with all his teammates watching, both golfers failed to make their second shot on the green. Haas saw his shot land in the bunker, while Bae’s ended in the grass about 15 meters (49 feet) from the green. 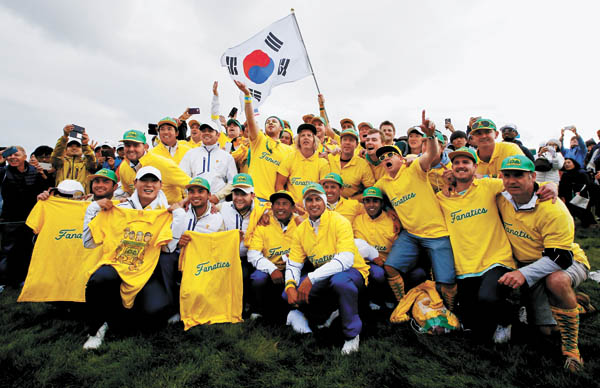 Members of the International Team join a group of supporters for a photo following their narrow loss to the United States at the Presidents Cup at the Jack Nicklaus Golf Club Korea in Incheon on Sunday. [AP/NEWSIS]

Bae, who had collected two KPGA Korean Tour wins at the course, was looking to land his chip shot. Instead, his shot failed to get over the hill, eliciting a surprised gasp from the home crowd. His fourth shot landed on the green, but it was too late - Haas’s third shot escaped the bunker to land about 6 feet from the hole. 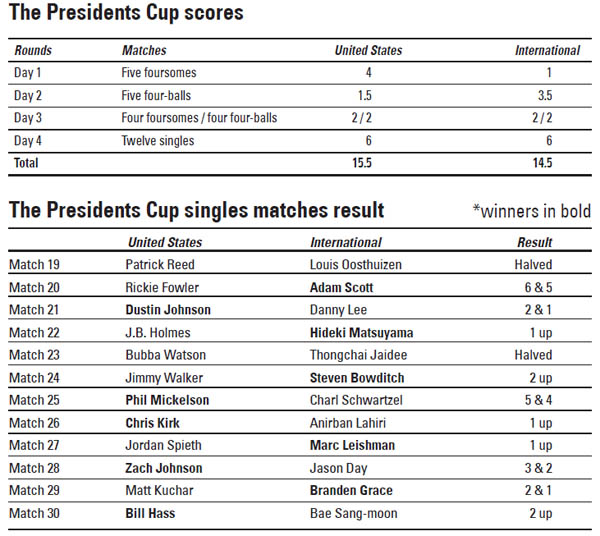 “I knew that [my match will determine the Cup] from the 16th and was pretty nervous,” Bae said. “That’s why I hit that really bad chip over there.”

It was Bae’s only loss in this tournament after collecting two wins and one draw in his Presidents Cup debut. He didn’t play Thursday’s foursome.

“My golf is continuing,” he said. “It could be two years later or four years later because of my personal issues, but I want to play in the Presidents Cup again and beat the U.S. Team.”

Bae’s pressure could have been lessened if Anirban Lahiri had halved the match with Chris Kirk. Entering all-square, Lahiri, the first Indian to play in the Presidents Cup, missed a 4-foot birdie putt on the 18th, while Kirk, who is also a tournament rookie, rolled on a 15-feet birdie.

“I would like to rewind and just change the last ten seconds of it,” Lahiri said. “No, I think it wasn’t meant to be. I can’t feel too bad because I didn’t hit a bad putt.”

International Team captain Nick Price said that their experiences here will serve as lessons for the future.

“I don’t want any of you to be negative in any way toward Anirban and Moon,” he said. “Today is a day they will never forget, but I hope that they use it in a positive way to take the next step.”

Before the event began at the Jack Nicklaus Club Korea, the United States was thought to be in for an easy win, considering the depth of the squad and its historic head-to-head record. The dominance of the Americans seemed to continue on the first day, as they led 4 to 1 in foursome matches.

But since Thursday, the matches have been running tight. Reversing the tide at four-ball matches on Friday, the International Team had been just one point under the Americans. Vice captain K.J. Choi said that reducing total number of points from 34 to 30 had helped the team.

“We hope to continue this format [of having 30 matches],” he said. “I’m satisfied that we have played matches that are close and undecided until the end.”

In this Presidents Cup, the International Team’s performance was boosted by the South African duo of Louis Oosthuizen and Brendan Grace.

Oosthuizen and Grace had won all their team matches before entering the singles matches on Sunday, making them the first group to stay 4-0 in the Presidents Cup since Tigers Woods and Steve Stricker did so for the United States in 2009.

Oosthuizen and Grace continued to collect points for the International Team on Sunday. Oosthuizen, who was making his second appearance in the Presidents Cup, never led Patrick Reed on Sunday, but he managed to share the point at the final hole after he made an eagle.

Grace was even better. He became the fifth player after Mark O’Meara, Shigeki Maruyama, Tiger Woods and Jim Furyk in Presidents Cup history to collect five wins in one tournament after beating Matt Kuchar on Sunday.

“Coming and getting five points for the team is pretty big,” he said. “But it’s not just one or two guys, the whole team lost, and we all felt just as bad as maybe Sang-moon or Anirban.”

Compared to the South Africans, the Australians were quiet throughout the tournament with no wins collected until Sunday. The four Australians amassed only four draws and nine losses until entering the singles matches.

However, Adam Scott managed to cut the tape first by getting a 6-and-5 victory over Rickie Fowler, followed by rookie Steven Bowditch, who collected a 2-up win against Jimmy Walker.

The most unexpected victory came from world No. 37 Marc Leishman, who pulled off a 1-up victory from No. 1 Jordan Spieth.

The only Australian to disappoint was world No. 2 Jason Day, who suffered a 3-and-2 loss to Zach Johnson on Sunday to end his second Presidents Cup with one draw and four losses. Day’s only point came on Friday’s four-ball, during which he and Scott halved the match with Phil Mickelson and Zach Johnson.

Organizers said that more than 85,000 fans have visited the golf club in the last four days.