Buddhas and Bodhisattvas from 8 nations

Buddhas and Bodhisattvas from 8 nations

The exhibition focuses on how Korean artists developed their own aesthetics through exchanges with India, Southeast Asia, China and Japan. Provided by the National Museum of Korea.

Only the bottom part of what was a gigantic, stone Bodhisattva remains.

The right foot rests on the left knee. The left hand lightly touches the right ankle.

This 7th-century “Bodhisattva in Pensive Pose” (also known as “Maitreya in Meditation”) from Korea’s Unified Silla period (676-935) was believed to be as tall as 3 meters (10 feet) when it was whole, which would have made it the largest pensive Bodhisattva in the world.

Since it was discovered in Bonghwa Country, North Gyeongsang, in 1965, it has been kept at the Kyungpook National University Museum in Daegu for the past 50 years and has never left the museum.

But now, the rare stone sculpture is being displayed at the National Museum of Korea in Yongsan District, central Seoul, as part of the “Masterpieces of Early Buddhist Sculpture, 100 BCE-700 CE” exhibition.

Even though the work only extends to the Bodhisattva’s waist, it measures 1.7 meters in height and weighs 2.6 tons. Museum insiders say they had to conduct a careful study to make sure the exhibition hall’s floor could handle the weight. 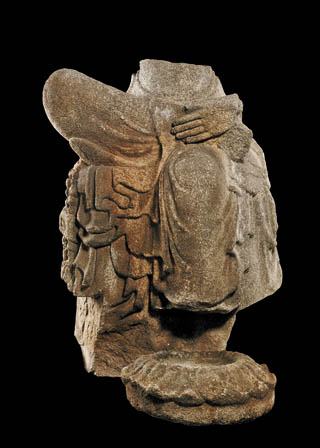 Seventh-century “Bodhisattva in Pensive Pose” from the Unified Silla period (676-935) was believed to be as tall as three meters (10 feet). Provided by the National Museum of Korea.

The exhibition is a special event to mark the 10th anniversary of the museum’s relocation to its current site. The museum used its international connections to bring about 210 Buddhist sculptures from 26 institutions in eight countries.

The result is the museum’s third comprehensive exhibition of Buddhist art since the 2008 exhibition called “Echoes of Life: the Enduring Tradition of Unified Silla Sculpture” and the 1990 show titled “Buddhist Sculptures from the Three Kingdoms of Korea.”

Officials say this exhibition is different in that it focuses on how Korean artists developed their own aesthetics through exchanges with India, Southeast Asia, China and Japan.

The show focuses on sculptures of Buddhas and bodhisattvas, as they constitute the core of this genre. 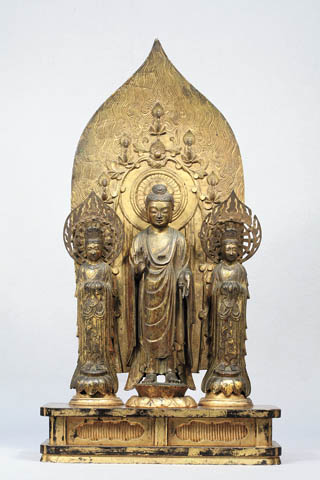 “Buddha Triad” from the 6th to 7th centuries is believed to have been started in Korea and completed in Japan. Provided by the National Museum of Korea.

In early Buddhism, there were no Buddha sculptures because early believers thought the remains of the Buddha were the most important object of worship and icons of him were prohibited. Only in the first century in the Gandhara Mathura regions of the subcontinent did Buddhist sculptures begin to emerge. That is the focus of the first section of the exhibition, which is titled “Buddhist Sculptures of India: The Beginning of a Long History.”

It is also in this section where visitors can enjoy Buddhist sculptures from Vietnam, which are conspicuously different from those of India and China.


Make it our own

It is in the third section, “Buddhist Sculptures of the Three Kingdoms Period of Korea,” where visitors can learn how Korea adopted the art genre. One of the highlights is the “Buddha Triad” from between the 6th and 7th centuries.

The Horyuji Temple in Japan donated the gilt-bronze, 28-centimeter (11-inch) artifact to the Tokyo National Museum. It has never before been displayed outside Japan.

Officials of the National Museum of Korea believe that this sculpture was partially made in Korea’s Baekje Kingdom (18 B.C. to 600 A.D.). The principal Buddha and the halo are believed to have been made in Korea while the rest were made in Japan.

This, along with some other sculptures of Korean origin kept at Japanese institutions, are exhibited to highlight how the startling artistry of Korea’s Buddhist sculpture was part of the reason Japan became curious about Buddhism in the first place.

But perhaps the most intriguing part of the exhibition is the last section dedicated solely to pensive bodhisattvas.

Although there are pensive bodhisattvas from other parts of the world, that form is particularly Korean. 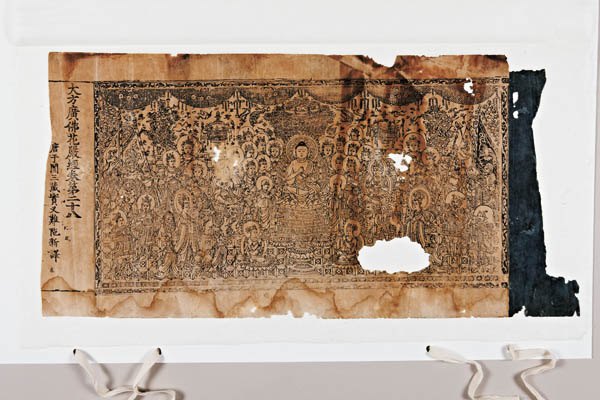 Hwaeom-gyeong Sutra (the Avatamsaka Sutra, or the Huayen Sutra). Provided by the Central Buddhism Museum.

It is also historic how in this section, the museum displays both National Treasure No. 83 and No. 78 together. Considered among the museum’s most treasured items, usually the two take turns at permanent exhibitions. This marks the first time in 11 years that the two are both being displayed.

“The best part about sculptures is, depending on where the light is coming from and where you are standing, they look different,” Yang says.

The two national treasures are displayed so they can be viewed from all around, and the lights change from total darkness to total brightness very slowly to represent sunrise to sunset.

They include 15 books comprising the Hwaeom-gyeong Sutra (the Avatamsaka Sutra, or the Huayen Sutra) that were found inside the 13th-century “Wooden Seated Amitabha Buddha” statue in Gaeun Temple in Seongbuk District, northern Seoul.

The books were part of bokjang relics, which refers to articles believers enshrined inside the abdomen of Buddha’s statue.

Yi Boon-hee, the museum’s chief curator, said that the bokjang relics of the 13th-century Buddha statue in Gaeun Temple are the earliest known bokjang relics in Korea. In particular, the books, which are part of Korea’s Treasure No. 1650, have never been displayed in public before.

“It’s notable how the books were written between the 9th and 12th centuries, which was before the Buddha’s statue was enshrined,” Yi said. The museum is also displaying 18th to 19th century Buddhist paintings from Daegoksa Temple, including “Samhwasang Jinyoung” (1782), which features three notable monks of the times: Venerables Jigong, Naong and Muhak.

The “Masterpieces of Early Buddhist Sculpture, 100 BCE-700 CE” exhibition runs until Nov. 15. Tickets for adults are priced at 6,000 won ($5). Opening hours are from 9 a.m. to 6 p.m. on weekdays, excluding Wednesdays. Hours are extended until 9 p.m. on Wednesdays and Saturdays to encourage nighttime viewing. Hours on Sundays and holidays are from 9 a.m. to 7 p.m. The venue is close to Ichon Station (lines No. 1 and 4), exit 2. For more information, call 2077-9000 or visit www. museum.go.kr.

The Autumn Exhibition at the Central Buddhism Museum runs until Nov. 22. For more information, call 02-2011-1960 or visit museum.buddhism.or.kr.