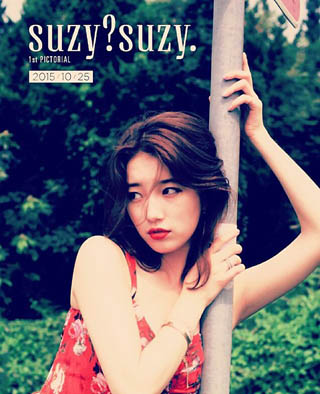 She uploaded a series of photos onto her Instagram account and said they are part of her upcoming pictorial titled “Suzy? Suzy.”

In the photos, Suzy shows off various sides of her personality by wearing a range of costumes, from an off-the-shoulder top to a tropical dress.

The first pictorial of the singer-actress will reportedly hit bookstores on Oct. 25.

Suzy, one of the most sought-after actresses on the small and big screens, debuted in 2012 as a member of the girl group Miss A.

Since her debut, Suzy has been performing in the group and starring in films such as “Architecture 101” (2012) and the drama series “Gu Family Book” (2013). She recently finished shooting the period film “Dorihwaga,” which is set during the Joseon era (1392-1910).

Suzy also landed a lead role in an upcoming drama series, where she will pair up with Kim Woo-bin of “The Heirs” (2013).