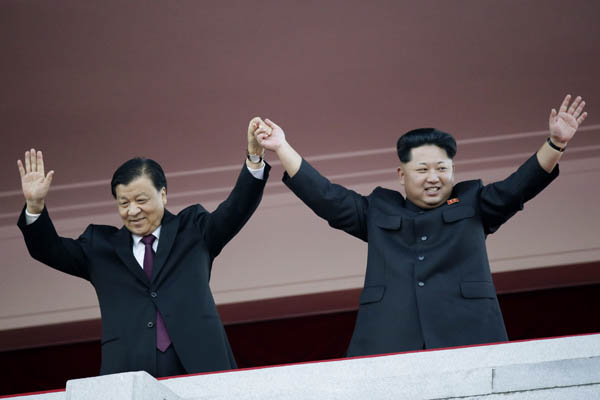 North Korean leader Kim Jong-un, right, stands with visiting Chinese official Liu Yunshan during a parade in Pyongyang on Saturday. The Chinese visitor’s attendance was interpreted as a signal of improving relations between North Korea and China, which deteriorated significantly since Kim took the office. [AP/NEWSIS]

PYONGYANG, North Korea - North Korean leader Kim Jong-un took center stage at a military parade and mass rally in Pyongyang on Saturday to mark the 70th anniversary of the country’s ruling party by declaring in a rare speech that the North has no intention of straying from the socialist track established by his grandfather and is ready to stand up to any threat posed by the United States.

With the eyes of the world upon him, Kim, the youngest and most enigmatic head of state, confidently and firmly delivered the speech from the balcony of the palatial People’s Grand Study House as tens of thousands of his countrymen and an unusually large international media contingent watched from their places below on the capital’s iconic Kim Il Sung Square.

To punctuate his rhetoric, thousands of goose-stepping troops, tanks, armored vehicles, rocket launchers and a variety of missiles mounted on trucks then rolled through the square. Military aircraft flew in formation above head, forming the symbol of the Workers’ Party of Korea - a hammer, brush and sickle. Another group of planes formed the number 70 in the sky.

“Our revolutionary force is ready to respond to any kind of war the American imperialists want,’’ he said, flanked by visiting Chinese official Liu Yunshan and senior North Korean officials. He said North Korea’s policy of putting its military first has made it “an impenetrable fortress and a global military power.’’ 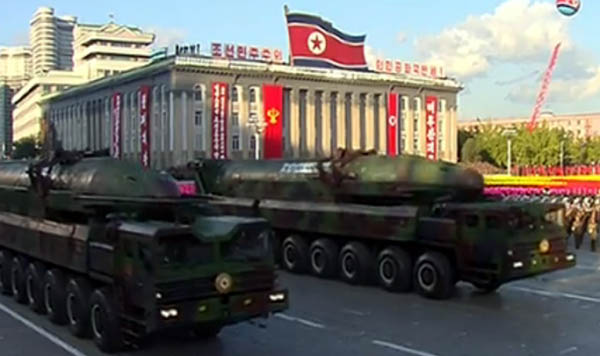 North Korea shows KN-08 intercontinental ballistic missiles with remodeled warheads at the parade on Saturday. The maximum range is believed to be 12,000 kilometers (7,500 miles). [NEWSIS]

Brightly colored floats and thousands of civilian marchers waving red and pink bouquets of plastic flowers followed the military show. Others held up cards to spell out Kim’s name.

As the parade ended, Kim waved to the crowd and raised clasped hands with Liu.

The afternoon rally, delayed by heavy rains the night before that required extensive mopping up of the square, was followed by a torchlight rally and fireworks display. The finale was a concert on a special stage set up on a river running through central Pyongyang. Tickets for foreigners were going for 100 euros ($114).

Altogether, it was the most elaborate spectacle North Korea has held since Kim assumed power after the death of his father, Kim Jong-il, in late 2011.

Though military parades fell out of fashion for about a decade starting in the 1990s, Saturday’s was somewhat more elaborate than a similar anniversary event held two years ago, an indication that rolling tanks and missiles through the center of the capital is still seen by the North Korean government as an attention-getting way of showing the world and its own people the Kim dynasty is firmly in control and its military a power to be reckoned with.

Liu, the No. 5 leader in the Chinese Communist Party, was the most senior foreign dignitary, though Cuba, Vietnam and other countries sent delegations. Kim has yet to make state visit abroad - his highest-profile visitor to date was former NBA star Dennis Rodman - and he chose not to attend recent anniversary ceremonies held by his country’s two closest allies, Russia and China.

North Korea has shown no interest in giving up its nuclear capability, which it considers the crown jewel of its national defense strategy.

Kim didn’t specifically comment on North Korea’s nuclear or long-range missile capabilities at Saturday’s event and also didn’t have anything to say about relations with rival South Korea. He spent most of his speech touting the party’s successes in improving the lives of the North Korean people.

An expert at the Korea Institute for Defense Analysis, a security think tank in Seoul, Kim Jin-moo, said North Korea revealed a new 300-millimeter rocket launcher. It also displayed drones and a KN-08 ballistic missile, with an estimated range of 10,000 kilometers (6,200 miles) that the country had previously shown off in 2012.

Kim said the presence of Liu might have prevented the North from revealing its most provocative weapons. Even so, further analysis of the missiles and other weapons on display - which in the past have included mock-ups or fakes - could give experts clues to the North’s actual capabilities.

Some foreign analysts also believe that by putting the particularly strong emphasis this year on making the anniversary of the party’s foundation such a lavish affair, and in delivering his own lengthy speech, Kim was trying to build up his own stature along with that of the party relative to the military. Keeping potentially powerful institutions carefully balanced against each other is a key to the stability of Kim’s dictatorial leadership.