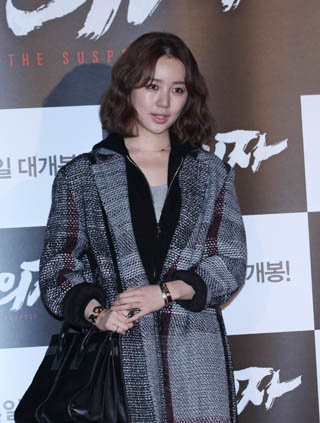 It is her third win, and her creation, a full-length gray coat, attracted the highest bids from Chinese TV show guests and on online shopping malls.

A combination of Yoon’s gray coat and a handmade clutch received a bid of 7.4 billion won ($6.5 million). The bidder earned the exclusive right to sell Yoon’s gray coat.

During the show, Yoon burst into tears and said, “There’s more than meets the eye. I appreciate people who have supported me.”

Tao, a member of the 10-member K-pop boy band Exo, also appeared in the show and bid on Yoon’s gray coat.

“Goddess’ Fashion” is a reality show in which professional designers and celebrities pair up and make their own clothes, and Yoon is one of the celebrity participants.

But Yoon came under fire for copying Korean designer Yoon Choon-ho’s white coat with fringe on both arms in September.

Yoon’s agency, however, denied the accusation and said her coat was inspired by the film “The Chronicles of Narnia: The Lion, The Witch and the Wardrobe.”

Yoon did not comment on the copying issue, but she told Ilgan Sports, an affiliate of the Korea JoongAng Daily, earlier this month, “I won’t appear in the new season of ‘Goddess’ Fashion.’”