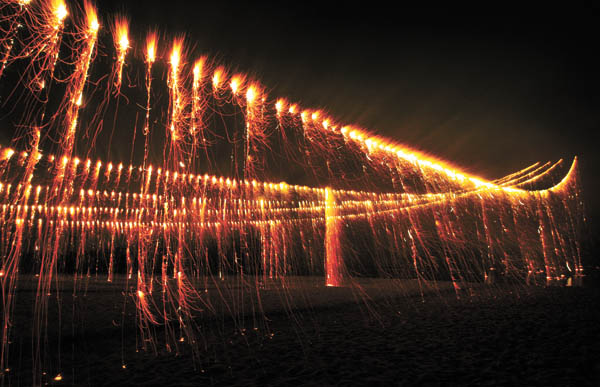 The Seonyu Julbul Nori display, which took place at the the Hahoe folk village, in Andong, North Gyeongsang on Oct. 3. This unique ritual involves the use of traditional Korean fireworks.

One is the “Hahoe Byeolsingut Tallori,” a Korean mask performance enjoyed mainly by commoners in the old times.

The other is the “Seonyu Julbul Nori,” a kind of fireworks display over a river. The event was typically viewed by aristocrats, who took in the show from a boat on the river itself. 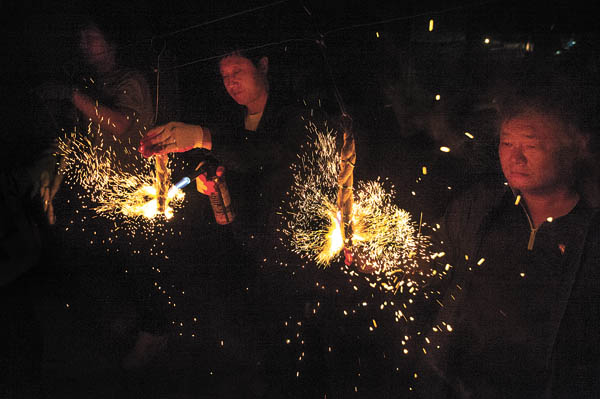 Bags of mulberry charcoal are lit, which later explode and create the illusion of stars falling into the river.

At the Andong Maskdance Festival on Oct. 3, the Nakdong River - which surrounds Hahoe - was packed with boats to prepare a glamorous setting for this year’s Seonyu Julbul Nori, which has been held in the village for over 450 years.

As soon as the firecrackers were lit, the visitors that had gathered at the pine groves in Buyongdae, a cliff that overlooks the village, gasped with wonder at the illumination.

As the villagers lit one end of the firecrackers’ string, the crackling sound and bright lights pierced the darkness of the somber autumn evening. As the ray of fire traced along the river downstream, a boat in the middle of the river lit its lantern in response, signaling the start of Seonyu Julbul Nori.

Seonyu Julbul Nori is comprised of four parts: Baet Nori, Julbul Nori, Dalgyal Bul Nori and Nakwha Nori. Baet Nori, which means “to enjoy boating,” is the main part of the recreation. Traditionally, while on the boat, scholars and aristocrats would enjoy drinks and ad-lib poetry. Other parts of the recreation serve to supplement Baet Nori and elevate its elegance.

Julbul Nori is the most beautiful part of the event. Fifteen-hundred little bags are strung on five long, thin threads. These threads are stretched across the waters, from the summit of Buyongdae, 64 meters (210 feet) high, to the pine forest of Mansongjeong. 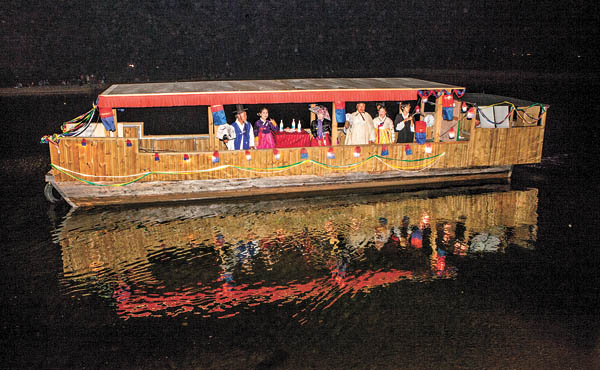 A boat on the middle of the river prepares for the Baet Nori.

Inside these little bags is a combination of charcoal created from burnt mulberry and salt, which explodes when ignited. In fact, the salt is what creates the popping quality of the fire, transforming them into something like fireworks.

The explosions create the illusion of stars falling into the river. 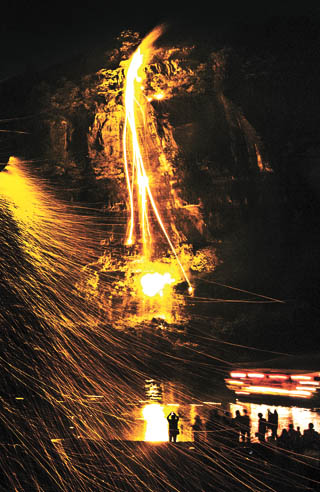 A ball of pine twigs is lit and pushed from the top of the Buyongdae cliff, left, which creates a bouncing spectacle of fire. .

Another highlight of the Julbul Nori is Nakwha Nori. With each member thinking of a wish, the audience shouts, “Nakwha-ya” as villagers light a pile of pine twigs pre-prepared at Buyongdae.

Once lit, an immense ball of fire shoots straight down from the cliff, hitting the rocks and spraying fire in all directions, marking the climax of the event.

Dalgyal Bul Nori entails taking emptied egg shells, filling them with pieces of paper and cotton, then soaking them in oil and lighting them on fire.

Right when Baet Nori starts, people drop the egg shells from the north side of the river so that they to stream down to where Baet Nori is located. The floating bits of flame serve as an important element of the atmosphere.

Supposedly, the event was a favorite of the village’s aristocrats, who considered the pairing of the moonlit night and the Seonyu Julbul Nori’s many components - the fireworks spewed from the Julbul, the ball of fire that crashes onto the river from the cliff, the lit egg shells floating along the river - an exceptional union between nature and man.

Seonyu Julbul Nori, which was halted during the Japanese colonial era, took place intermittently in the years after liberation. These days, it takes place twice during the Andong Maskdance Festival.

“Hahoe village’s Seonyu Julbul Nori is, to put it in one word, phenomenal,” said Claude Roche, a mime performer from France. “Unlike western firework festivals, there is a level of solemnness that leaves the image of the [fireworks] lingering in one’s mind for a long time.”