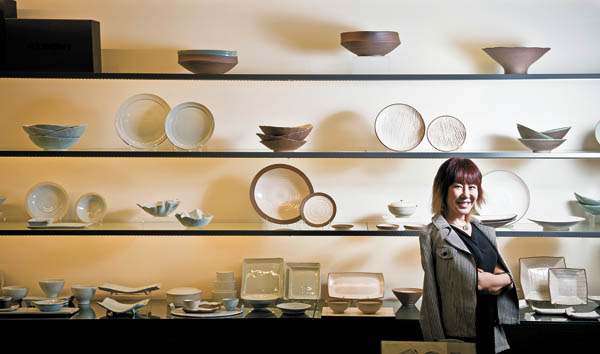 Yi Yoon-shin, a ceramic artist and Yido’s founder, says a good piece of dinnerware puts the emphasis on the food. By Kim Gyeong-rok

Korean-made, quality dinnerware is losing ground, sandwiched between high-end, luxury ceramics from the West and affordable, low-cost counterparts from China.

For years now, the dinnerware sections in Korea’s department stores have seen a European invasion, with Korean housewives snapping up brands like Royal Copenhagen and Portmeirion. Discount stores today, meanwhile, are occupied by cheap Chinese goods.

Add to this a prolonged economic recession. Some of Korea’s pottery brands that have refused to compromise on quality have seen better days.

But taking this into account, Yido Pottery’s story is a little different: Last year, the company set up house in a five-story building in the posh neighborhood of Dosandae-ro in Gangnam, southern Seoul. The building - which has emerged as one of the trendier places in the area - boasts a restaurant, a shop, a pottery academy as well as a culture center for cooking and flower arrangement.

Yido Pottery also recently opened a shop in Hyundai Department Store in Pangyo, Gyeonggi, where some of the hottest brands have secured a spot. In fact, the dinnerware section of the Pangyo department store is a battleground for prestigious pottery brands like Royal Copenhagen, Aynsley China and Haviland & Co.

Along with ZenHankook, Yido is the only Korean dinnerware brand that has made it in.

Behind the company’s achievements is Yi Yoon-shin, Yido’s founder as well as a ceramic artist. In a recent interview with the JoongAng Ilbo, Yi said that just like she did with Yido’s headquarters in Gahoedong, Jongno District in its early years, she hopes to spread Yido’s culture and spirit in the Gangnam District. 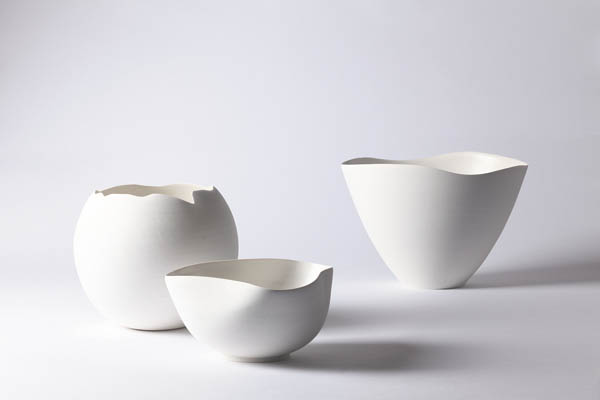 But perhaps the most notable characteristic of Yido’s designs is that they stick to the principle, “less is more.” The shapes and curves are natural, not pretentious, and the colors are not too light, not over-the-top.

They allow the food arranged on them to stand out - not the other way around.

“I look forward to every morning,” said Yi, who has been making pottery for the past 25 years. “I often think, ‘Which dinnerware would I put my food this time?’”

Yi’s parents co-founded Wonshin W-Mall, a fashion outlet mall, which began in 1981 as Wonshin Trading. Consequently, Yi, an only child, spent most of her childhood alone. That was perhaps one reason why she became so interested in working with clay.

“There’s only so much you can do with metal or fabric,” she said. “But with soil, it takes on all kinds of shapes depending on how I mold it. It always worked out according to how I intended it. I felt that soil would lead me somewhere.”

It turned out she was right.

Yi received her bachelor’s degree at the Art College of Hongik University and her master’s at the Hongik Graduate School of Art and the Kyoto City Graduate School of Art. Along the way, it’s become her goal to make pottery that consumers can use in their daily lives, not pottery meant to be displayed in galleries. 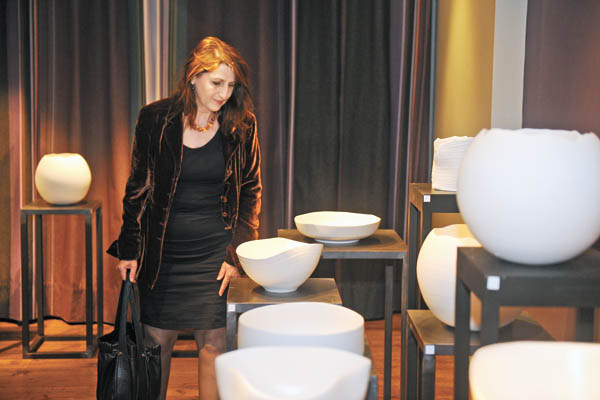 Yi says that although she thinks white porcelain best represents what is quintessentially Korean, her pieces are not merely copies of old pottery but are created using new materials, modern techniques and glaze. Provided by the company

In 1990, she opened a small studio in Anyang, Gyeonggi. Two years later, she opened a shop in Insa-dong, central Seoul, and branded her pottery Yido, short for Yi Yoon-shin’s dojagi (pottery).

Not long after, Yido made its way into high-end department stores. And in 2011, in a PBS documentary, “Kimchi Chronicles,” renowned chef Jean-Georges Vongerichten was seen using Yido products, further cementing the company’s position in the industry.

The 57-year-old has held a number of solo and group exhibitions since her first show in Japan in 1984. Most recently, she held an exhibition, “The Beauty of the Inimitable Ordinary,” which ran from Sept. 25 to Oct. 2, in Paris.

The JoongAng Ilbo, an affiliate of the Korea JoongAng Daily, sat down with Yi before she left for Paris to learn more about the present crisis facing Korean-made dinnerware, Yido and its plans.

Q. What’s your Paris exhibition about?

A. It’s my first solo exhibition in Paris. I personally like Paris, particularly because I think the city values culinary culture. In that sense, I think Paris can understand Yido’s values. Also I think Yido will be better appreciated in Europe, which values hand-made products and craftsmanship, compared to the United States, which emphasizes practicality. My exhibition’s highlight is white porcelain. I think white porcelain is quintessentially Korean. However, they are not traditional white porcelain pieces. The materials, techniques and glaze I use differ slightly.

Some would argue these days that amid the deluge of foreign imports, there is no place for quality Korean-made dinnerware.

It’s true. It’s a crucial time for Koreans to protect what is Korean [in terms of dinnerware]. Prestigious foreign brands began to make inroads into the Korean market in the 1990s. And in recent years, low-cost dinnerware made in China, Southeast Asia and elsewhere has dominated the aisles of discount stores. They look quite charming, because many of them emulate the designs of renowned Western brands. Looking at it this way, it’s an uphill battle for quality Korean-made dinnerware in terms of securing its footing.

Still, it appears Yido is doing quite well at department stores.

Department stores, in fact, can be a barometer to see if a certain item is sellable or not. It’s quite meaningful in that sense that department stores want Yido products. We were lucky to get into Hyundai Department Store in Pangyo, Gyeonggi. The response so far has been great. We are especially encouraged by the fact that 80 percent of our customers at the shop are first-time buyers. It means that they purchased our product not out of familiarity or brand loyalty, but because they really liked our products, our design.

Why did Yido open a shop in southern Seoul? Yido began in northern Seoul, and since then the brand has prospered there.

When we first opened Yido’s headquarters in Gahoe-dong, Jongno District, it was a quiet neighborhood. I wanted to transform the area into a cultural epicenter. We held pottery classes and opened a coffee shop. We also held a classical concert once every two months because I wanted to share with others my passion for classical music. [Gahoe-dong today is part of Bukchon, a cluster of centuries-old hanok and a major tourist destination.] I now hope to spread the Yido culture and spirit in Gangnam. Many of Yido’s loyal customers have been based in Gangnam.

Many people tried to talk me out of including a restaurant in the building, saying the restaurant business was much tougher than I think. But I thought it was inevitable. After all, dinnerware and food - can you really separate them? The restaurant business, in fact, helped Yido grow. Because we cook food in ovens, we developed pottery just for ovens. Needless to say, the people who ate at our restaurant on the first and second floors came to our shop on the third floor to look through the plates and bowls that they just ate from. I actually thought the dinnerware would be the factor that differentiated our restaurant from other restaurants. So far, it seems I’m right.

Do you design all Yido products on your own?

I used to - until last year. I set up a design team last year because I saw so many great brands that end up losing their former glory after the founding designer passes away. Today, I design with five other artists. They all understand Yido’s values and philosophies well and they also work well with me. I hope Yido continues to be Yido long after I die, for hundreds of years, like Chanel or Yves Saint Laurent.

What’s your definition of a good piece of pottery?

When food is put on it, it has to make the food look good. For that to happen, the piece shouldn’t have a “strong voice,” so to speak. Recently, chinaware with strong patterns has come in-style. In my view, they don’t spotlight the food. Same goes with dinnerware with strong colors. Korean food, in particular, often uses dried red pepper powder and comes in strong colors. It doesn’t mean all plates have to be white. Take for instance, jangdok [Korean earthenware pots]. They harmonize with the food. You never get tired of them.

Yido began as a small studio but is now a large enterprise. What are some of the difficulties?

About eight years ago, I launched Yido’s second brand so that people who couldn’t afford Yido pottery could also buy our products. I designed the original sample and it was mass produced at a factory. Many people said they were deeply disappointed with the quality and even claimed we were only after money. My intention was to make Yido more affordable, and I actually spent a lot money setting up the production facility.

But it was then I learned that I should never compromise on brand value and identity. We recalled the products and broke them all. Since then, we make all our products at our workshop in Yeoju, Gyeonggi, handmade and burned at kilns at 1,250 degrees Celsius.

I hear you are a die-hard fan of home cooking.

I am obsessed with it. Before my daughter moved out, we always ate dinner together and chatted for hours. I cooked what I could. She cooked what she could. I think those times are extremely precious because it’s such times like those that keep you going. Sometimes we argue. But even those times I really love. These days, people eat out or by themselves. Even when they eat together, they surf the web or chat on their smartphones. I think it’s so regrettable how they’re letting such precious time slip through their fingers.

How do you stay fit?

At the end of October, we’re opening a handmade lifestyle shop, Yido Hands. Being a pottery artist, I’ve been interested in lifestyle products for some time now. Also, I’m naturally interested in hand-made craftwork. I always wanted to open a shop dedicated to hand-made lifestyle products. Conventional lifestyle shops feature foreign or mass-produced goods, but our shop will be different. There will be everything from clothes, aprons and scarves to wood, glass and fabric decorations.