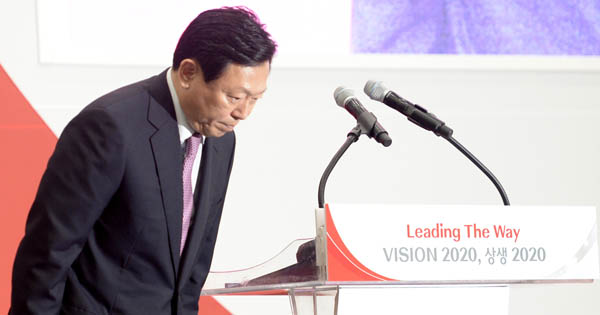 Straight-faced Lotte Group Chairman Shin Dong-bin bows at a press conference at Lotte Duty Free’s logistic center in Incheon on Monday. He said he will focus on management. [NEWSIS]

The smile on the face of Lotte Group chairman Shin Dong-bin, which was evident even when he was being drilled by lawmakers during the National Assembly hearings earlier this month or when the management feud with his brother was at its peak in August, was nowhere to be seen.

On Monday the 60-year old chairman of Korea’s leading retail conglomerate said he will focus firmly on management without any distraction.

He was appearing in his first press conference since his 61-year-old brother and former vice chairman of Lotte Holdings, the de facto holding company of Lotte’s Japanese operation, officially announced a second management battle against his younger brother last week.

The older Shin last week came to Korea and announced his father and the founder of Lotte Group, Shin Kyuk-ho, has given him power of attorney. He also showed a video clip of the founder signing the document.

The younger Shin was at a ceremony at Lotte Duty Free’s second logistic complex in Incheon where the company announced its duty free vision.

At the ceremony Shin Dong-bin said he would talk briefly on the recently refueled feud. “The one thing that I consider most important is turning the Lotte Group into the most beloved company by the Korean people through securing management transparency and improving corporate structure,” Shin Dong-bin said.

“The recent event does not help and only has a negative influence.

“This ceremony is being held to show our vision on the duty free business,” the chairman added. “We will work hard to become the Samsung Electronics in the service sector by becoming No.1 in the world by 2020.”

The social contribution will also be used for helping those in the lower income class to economically stand on their own and improving tourism
infrastructure.

Lotte’s duty free license at its main branch in central Seoul ends on Dec. 22 while the one in Jamsil, southeastern Seoul, will end on Dec. 31.

The custom office is already reviewing some of the competitors that will be managing the new duty free licenses in Seoul and Busan. For Seoul, Lotte is trying to protect its license while SK Networks, Doosan and Shinsegae have tossed in their bids.

For Busan Shinsegae, which currently has the license, will be competing against Fashion Group Hyungji.