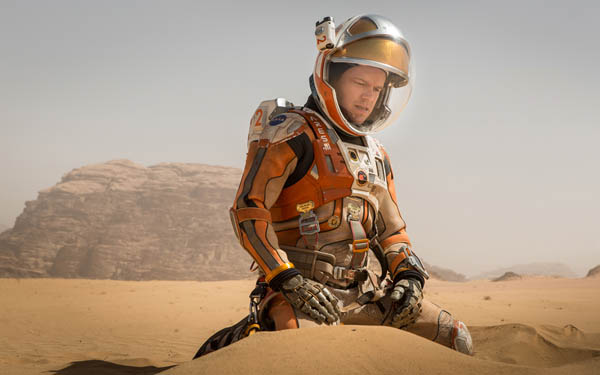 Ridley Scott’s space adventure “The Martian” skyrocketed to the top of the Korean box office in its debut weekend, attracting 1.5 million moviegoers, according to the Korean Film Council on Monday.

“The Martian,” which has Matt Damon in the leading role backed by a handful of other quality cast members including Jessica Chastain and Jeff Daniels, is an optimistic survival story of a stranded astronaut on Mars.

Left behind on the planet and considered by his teammates to be dead, Mark Watney (Matt Damon), a NASA astronaut, survives on the planet using his botanical knowledge and lots of optimistic energy.

The sci-fi adventure has earned 14.9 billion won ($13 million) so far in Korean theaters.

Distributed by CJ Entertainment, the film, fully charged with thrills and comedy, features Lee Sun-kyun as an egotistical lawyer who thinks winning a trial is more important than protecting justice.

Lee Joon-ik’s period drama “The Throne” was in the fourth spot with an accumulated attendance of 6 million, which roughly translates to 47.2 billion won, while “The Accidental Detective” was in fifth place.

Meanwhile, “Pan,” loosely based on the “Peter Pan” fairy tale, opened with a lackadaisical performance of 126,554 ticket sales, landing in sixth place in the Korean box office.