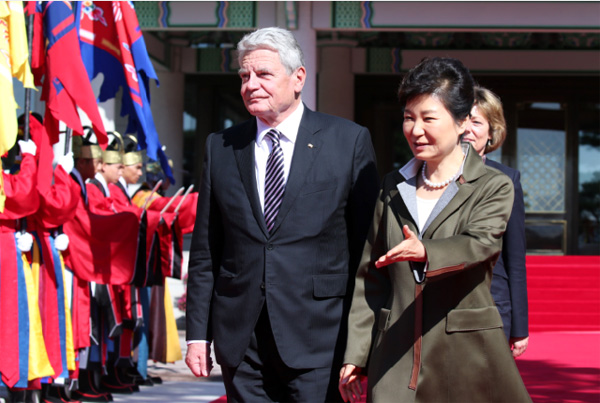 German President Joachim Wilhelm Gauck and President Park Geun-hye discussed the prospects for Korean unification Monday through the lens of Germany’s experience, alongside ways to expand bilateral relations and exchanges of information technology and innovative science.

“I hope German President Gauck’s visit to Korea can serve not only as an opportunity for cooperation on peace and unification [on the peninsula],” Park said, “but also a chance to advance bilateral relations even more in many areas including economy, science and technology and culture.”

She added that Korea and Germany “share the experience of division” and said that Seoul “has a special bond with Germany, our greatest trade partner in the European Union.”

The two countries trade increased to $28.9 billion in 2014, 36.9 percent higher than in 2009, according to the Blue House. Gauck and Park also oversaw the signing of a memorandum of understanding between the Korea Electronics Trade Institute and German automaker BMW for cooperation in IT and convergence technologies related to automobiles.

Gauck’s visit came upon the invitation of President Park following her visit to Germany last March. He held a joint press conference with Park after the talks, encouraging North Korea to abandon its nuclear weapons program and later that day addressed the National Assembly, saying Seoul should be ready to take on the challenge of unification of the Korean Peninsula.

Gauck conducted a written interview with the JoongAng Ilbo ahead of his visit in which he said the main goal of his trip is to “pay tribute to and strengthen the excellent relations between Germany and South Korea.” The following is an edited version of the interview:

Q. What is the purpose of your state visit to South Korea and what are your expectations?

A. There are many close ties between our countries. We work together in a wide range of fields. This cooperation, especially in business, research, education and science, is highly innovative and focused on the future. At the same time we have different concepts for further developments, for example in the field of education. We want to continue strengthening our partnership.

However, our countries’ similar fates lend my visit during the 25th year of German reunification and the 70th year of Korea’s division a symbolic importance. I myself come from East Germany, the GDR [German Democratic Republic] - that is, the part of our country that was under communist rule until 1989 and, therefore, was not free or democratic. I was active in the East German civil rights movement before 1989. After German reunification, I was in charge of safeguarding and managing the records of the State Security Service, the GDR regime’s secret service. This is why my visit to your country and the border to North Korea and my meetings and talks with politicians, representatives of civil society and refugees from North Korea are very special, also for me personally.

How do you rate the economic and social developments since 1990? Is Germany really reunited?

Eastern Germany is also home to small and medium-sized enterprises that are internationally successful. Representatives of some of these firms will accompany me on my visit to Korea. People in eastern Germany are making good use of the opportunities available to them. This gives me grounds to say that German unification has also made good progress in economic and social terms.

What role did former West German chancellor Willy Brandt and the late statesman Egon Bahr’s Ostpolitik have in Germany’s subsequent reunification, and how do you rate the “new eastern policy?”

“Change through rapprochement” was the motto of the new Ostpolitik drawn up and furthered by Willy Brandt and others from the mid-1960s, that is, shortly after the Berlin Wall was built. At the time, it was a highly innovative concept aimed at making that dreadful border more permeable and easier for people to cross. For example, an agreement on travel permits made it possible for East and West Germans to meet. This allowed families to stay in touch. And ultimately, this meant that the two parts of the country did not lose contact. When Willy Brandt was Federal Chancellor, he was awarded the Nobel Peace Prize for this policy and for reconciliation with West Germany’s neighbors in the East. His policy was highly controversial at first, but all subsequent Federal Governments pursued and developed the line he had taken as Federal Chancellor.

As a result, there were still close personal contacts between East and West despite decades of division. And despite its division, Germany always remained one nation. Along with the tremendous commitment shown by Federal Chancellor Helmut Kohl, this was one of the reasons why Germany was able to reunite in peace and freedom.

The Korean Government is hoping that you will have advice on its “Nordpolitik.” On the basis of Germany’s experience of division and reunification, what advice will you give Korea?

Above all, I would like to encourage Koreans never to give up hope. People in North Korea also have a right to live in freedom and dignity. However, it is difficult to give specific advice. The historic, political, economic and social situation in pre 1989 divided Germany is very different to that in today’s Korea, which is still divided. For example, there were close contacts between families, friends and church communities in East and West Germany throughout all the years of the division. This means that our experiences in Germany only apply to a certain extent to your country.

And finally, the fall of the Berlin Wall took people by surprise in both East and West Germany. But it was certainly crucial for the success of reunification that the East Germans themselves wanted to gain freedom, that very many people had the courage to stand up for this desire, and that they were able to achieve it thanks to the favorable overall circumstances.

The appeal of the buoyant and successful democracy in West Germany was a particular motivation, as well as the basis for their courage and their desire for freedom and democracy. The Federal Government’s long-standing persistent and patient efforts to open doors also played a role in our successful reunification.

To bring about peace on the Korean Peninsula and possible reunification, it is very important to bring North Korea and the international community to the negotiation table. What role could the European Union, especially Germany, play in this process?

In the first instance, the international talks mechanisms, such as the six-party talks, are particularly important here. We have always lobbied all participants to continue these talks. Both the EU and Germany are currently conducting a critical dialogue with North Korea. We are under no illusions ? and that also goes for the nuclear question. Nevertheless, we believe that dialogue at various levels can help to gradually open channels of communication and to create fundamental trust. Germany can continue to play a constructive role in this, as has been particularly evident since we established diplomatic relations with North Korea in 2001. We regard in-depth discussion as a better option than confrontation reinforced by a lack of communication. We would welcome greater willingness on North Korea’s part to engage in such a dialogue.