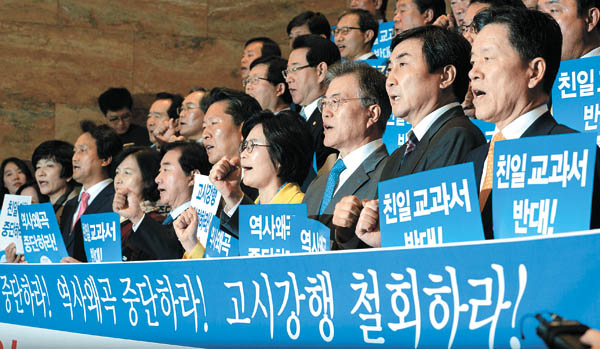 Lawmakers of the main opposition New Politics Alliance for Democracy stage a rally in the National Assembly on Monday to denounce the government’s plan to restore state control over history textbooks.[NEWSIS]

Korea will restore state control over history textbooks starting in 2017, the government announced on Monday.

The ministry said it will listen to various opinions about the change in the following weeks and finalize its plan. The grace period for an administrative change is normally 20 days.

The new textbooks will be used in classrooms of middle and high schools starting in 2017, according to the ministry.

Labeling the new state-authored materials “proper” textbooks, the ministry said they will be authored and published by the National Institute of Korean History under the ministry.

State control over Korean history textbooks was first introduced under the military rule of Park Chung Hee in 1974 and ended in 2010. The current system, in which schools choose from a range of textbooks approved by the Education Ministry, will only have lasted for seven years once the state-published materials are introduced in 2017.

Deputy Prime Minister and Education Minister Hwang Woo-yea said on Monday that the goal will be creating ideologically neutral textbooks.

“We will dispel the people’s worries over ideological biases and create textbooks based on constitutional values and objective facts to foster a proper view of the state and a balanced historical understanding for our youngsters,” Hwang said.

“It was an unavoidable choice for the government to correct the errors about historical facts and end the controversy over ideological bias in history textbooks,” Hwang continued. “We have come to the conclusion that it is simply impossible to find a fundamental resolution to the situation by correcting each and every error and mistake in the textbooks created by publishers and authors.”

The controversy over ideological bias in history textbooks started in 2013 when the ministry ordered all eight publishers of middle and high school history textbooks to make corrections to materials that had passed an initial screening by the state-run National Institute of Korean History.

In October 2013, the ministry recommended eight textbook publishers make a total of 829 revisions. While Kyohak Publishing Company - criticized for its conservative, right-wing bias - agreed to make all the changes, the authors of the other seven, criticized for left-leaning bias, refused to accept the recommendations. The controversy ended one month later, after the seven publishers revised the texts on their own.

At the time, the ministry said it would overhaul the textbook authentication system to prevent further ideological disputes. Asked if government-published textbooks would be reinstated, then-Education Minister Seo Nam-soo said that was not something a minister alone could decide.

Since then, the Park Geun-hye administration and the ruling conservative Saenuri Party have pushed a plan for the government to take control of history textbooks. Liberal opposition parties and historians vowed to oppose it.

“We will accurately record our history from ancient times to the modern period based on verified materials,” Hwang said on Monday. “Development of the Republic of Korea, which succeeded in industrialization and modernization and achieved remarkable development in science, the arts and culture, will be recorded with fairness and balance.”

According to Kim Jung-bae, head of the National Institute of Korean History, the government will have about one year to develop new textbooks. The authors will be selected in mid-November.

“The authors will be a team of experts from various age groups,” Kim said. The authors will also include experts in a wide range of specialties. Until now, historians or history teachers authored the textbooks.

“It is wrong to think that only historians have authority in modern history,” Kim said. “We will create a team of authors by inviting experts in political, economic, social and cultural histories.”

The authors will be selected by receiving applications and contacting experts, Kim said. The team will be made public as soon as it is selected to heighten the transparency of the process. Under the current system, authors have only been made public after publishers completed printing the textbooks.

A review panel for the drafts will include not only historians but also education, Korean language and constitutional experts, as well as teachers and parents.

According to the ministry’s proposed timeline, an initial draft will be completed in November 2016 and posted on the Internet. After the Internet screening and additional reviews by experts and teachers, the final texts will be printed in February 2017 and distributed to middle and high schools in March.

The main opposition New Politics Alliance for Democracy (NPAD) submitted a resolution to the National Assembly to dismiss Hwang from his post as soon as the ministry made the announcement. It said it will also file an injunction to the Seoul Administrative Court to stop the ministry from taking further steps to make the change.

NPAD Chairman Moon Jae-in also staged a protest at Gwanghwamun Square in central Seoul. The party held a meeting of its lawmakers, adopted a statement to condemn the Park administration and demanded the president’s apology for instigating an ideological war.

“I feel hopeless, like facing a giant wall, as I see the government and ruling party’s high-handed attitude to push the change as if it were a military operation,” Moon said at the meeting.

He said that in the past, state-published textbooks had flatteringly described Japan’s colonial rule of Korea as a process of modernization and the dictatorship of Park Chung Hee, the late father of the current president, as Korean-style democracy.

Historians and history teachers are not in favor of state control over history textbooks, Moon said, but the Park government and Saenuri Party are determined to bring back the old system for their own political purposes.

Moon said the NPAD will work with the public to stop the change. He also vowed to win a majority in next year’s general election and legislate a ban on state-published history textbooks.

The NPAD also said it will request a National Assembly investigation into problems associated with the textbook authorization system and the ministry’s plan.

The Blue House refrained from commenting on the issue Monday.