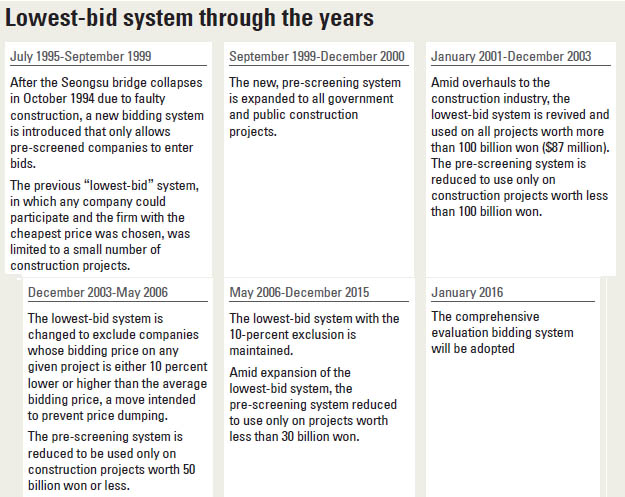 It was May 2009, and some roadwork needed to be done near Daejeon. The Ministry of Land, Infrastructure and Transport’s regional office was collecting bids for the project from various companies, all of which proposed similar prices. But then, one company swooped in and won the project with an exceptionally low bid of 51.8 billion won ($45.1 million).

The company submitted past projects and their outcomes. But after being scrutinized by the Board of Audit and Inspection, it was revealed that 13 of the provided documents had been falsified. In some instances, the seals of approval from the other regional offices of the Land Ministry were actually just photocopies.

The deception wasn’t an isolated incident. In August 2010, two major construction companies colluded to fix the bidding price for a project related to the larger government-led four-river restoration project.

The two companies each proposed 99.98 percent and 99.96 percent of the estimated construction cost of 47.5 billion won, respectively. Their goal was not to engage in a bidding war, but rather to win the project and share the work.

In response to cases like these, the government has been taking steps to overhaul how it picks companies for major infrastructure projects.

Until now, the company that provided the lowest bid won the project. But the government is working on adopting a comprehensive evaluation system it hopes will prevent the illegal acts that have commonly been part of the bidding process.

Under the current bidding system, companies have often deceived or colluded in order to win projects. Once they’ve won with an impossibly low bid, they typically pass those cuts on to their subcontractors, giving them an even smaller budget to complete the project.

The new comprehensive evaluation will choose companies not only by the price of their bid, but also their construction ability and social responsibility, including their relationships with and treatment of their subcontractors.

“Under the 100 points, the bidding price will account for 50 to 60 points, while construction ability will account for 40 to 50 points,” said Lee Ho-geun, a Finance Ministry official in charge of government contracting. “Those who have acted socially responsible will be given an extra point.”

Although social responsibility only receive a single point, it could be a determining factor because bidders typically receive similar scores.

In the social responsibility category, the government will be looking into four areas: hiring, antitrust activities, construction safety and the company’s relationship with the regional economy.

Each area will be given between 0.2 and 0.4 percentage points.

The new evaluation system will be adopted in December once it passes the National Assembly.

Initially, the system will only be applied to projects worth over 300 billion won.

This is not the first time that the government tried to change the way in which construction projects are won. Every time a major construction disaster has occurred, the lowest-bid system has been abolished. Typically, however, the system is quickly reinstated in response to media backlash about the government wasting money.

“The comprehensive evaluation bidding system could only be settled when the people who are evaluating have expertise and an ethical code, and when the process is transparent,” said Lee Yoo-seop, senior researcher at the Korea Institute of Civil Engineering and Building Technology.

Most construction companies are welcoming the new arrangement.

“We expect the comprehensive evaluation bidding system will help raise the price of final bids compared to the previous system,” said an official at a major construction company who requested anonymity. “Because it evaluates the construction company’s construction ability, there will be moves to improve quality rather than cut costs.”

The government has been testing the system since last year. But as construction firms’ abilities have been emphasized in the new deal, there have been complaints that larger companies will benefit the most, pushing out smaller firms.

“The primary cost-to-bidding-price ratio is at 78 percent, which is lower than the initial target of 80 to 85 percent,” said Choi Min-soo, head of the Construction Economy Research Institute of Korea’s construction policy research department.

“The institutions that still give out the projects are still focusing on the bidding price, and the system therefore needs to be designed meticulously to help improve the existing lowest-bid system.”