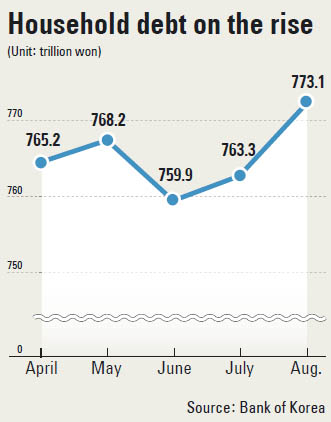 Korea’s household debts keep hitting new record highs and there’s no sign of it cooling down.

The outstanding balance has hit 773.1 trillion won, an all-time-high.

Since the government unveiled new measures to curb borrowing by financially unfit individuals in July, borrowing by households increased, as more people rushed to secure loans before it becomes too difficult to get one, industry insiders say.

Of the total loan increase, home mortgage loans stood at 6.7 trillion won, the biggest increase since the Bank of Korea started compiling the data in 2003.

Other loans rose by 3.1 trillion won, as more people borrowed to fund their summer vacations.

Other non-bank depository firms including mutual savings banks and credit unions saw an increase of 2 trillion won, including 500 billion won home mortgage loan and 1.5 trillion won in other loans.