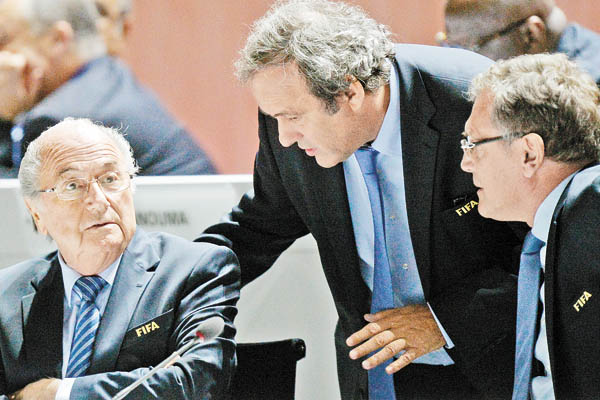 ZURICH - The toppling of soccer’s most powerful and recognizable leaders may have been sealed when FIFA President Sepp Blatter agreed to pay Michel Platini, the head of European soccer, 2 million Swiss francs ($2 million) in 2011.

Both men told FIFA’s ethics committee that Blatter was making good on a verbal promise to pay Platini the bonus, a person familiar with the case told The Associated Press.

Now, just as Platini was hoping to finally succeed the 79-year-old Blatter as FIFA’s leader, both men have fallen further into disgrace because Platini waited nine years before demanding the payment, despite the lack of a written contract, for work he did helping Blatter cement his leadership over professional soccer.

Unimpressed by their explanations and surrounded by criminal prosecutors, the FIFA ethics committee suspended both men from world soccer for 90 days, and could ban them for years once the probe is complete, the person said, speaking on condition of anonymity.

Running parallel are American and Swiss criminal investigations into soccer bribery. It was the Swiss attorney general who first disclosed details of the “disloyal payment’’ by Blatter after questioning him as a suspect following a surprise swoop on his office inside FIFA’s sleek headquarters.

The presidency is being held temporarily by Africa’s soccer president, Issa Hayatou, a Cameroonian who requires regular dialysis treatment and was reprimanded himself in 2011 by the IOC over a FIFA kickbacks scandal. Hayatou was expected at the Zurich headquarters this week, but his power is heavily restricted as lawyers oversee FIFA’s workings and the criminal investigations escalate.

Platini and Blatter strongly deny any wrongdoing. Platini is appealing to get the provisional suspension overturned so that he can run Europe’s soccer federation and campaign to replace Blatter in an emergency election on Feb. 26. But the provisional ban could derail Platini’s hopes. The FIFA executive committee meets on Oct. 20, and could postpone the election date, but if the February poll goes ahead, each candidate will have to pass an “integrity check’’ by FIFA’s election committee.

Whatever the terms of Blatter’s previously secret payment to Platini, FIFA investigators apparently considered it damning enough to banish both men pending the full inquiry.

For now, Platini seems to retain UEFA’s backing going into an emergency meeting of the executive committee and all 54 member nations on Thursday.

But executive committee member Allan Hansen broke ranks on Monday to tell Danish newspaper Ekstra Bladet that if there was no written contract for the disputed payment “we can no longer support him.’’

Platini was revered as the star of 1980s European soccer, winning titles for club and country and collecting the top personal accolades.

Then the former France captain took a seemingly fateful decision to immerse himself into the murky, often overtly corrupt, world of global soccer politics, helping Blatter to first get elected in 1998 and then working alongside him until 2002.

Contractually, Platini was to be paid 300,000 Swiss francs per year for this advisory job. The Frenchman received 1.05 million Swiss francs for 3 1/2 years of work, the person familiar with the FIFA ethics case said.

The criminal and FIFA ethics investigations center on an additional 500,000 Swiss francs per year that Platini said they agreed to defer until FIFA could afford it. This promise - and the payment Blatter approved in 2011, when Platini was supporting Blatter’s re-election - were based on nothing more than verbal agreements, the person familiar with the case said.

Under Swiss law, Platini should have called in the debt within five years. Platini said two weeks ago that he was not paid “the totality of my salary because of FIFA’s financial situation at that time.’’

FIFA’s accounts for 1999-2002 show a revenue surplus of 115 million Swiss francs. Platini feels “he has given satisfactory explanations to the authorities that are dealing with this case,’’ UEFA said last week.

Controversy has surrounded the votes in 2010 by Blatter, Platini and other committee members to name Russia as host of the 2018 World Cup and Qatar to host the 2022 event. AP