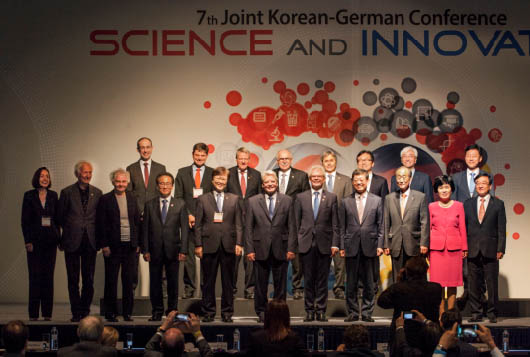 German President Joachim Wilhelm Gauck highlighted on Tuesday that innovation will be the basis for solving global issues as well as an area for future bilateral collaboration with Korea with the onset of a fourth industrial revolution.

“If we want innovation, we need to be able to be ready to take on the challenge,” Gauck said Tuesday at a conference in Seoul.

Innovation is reflective of “how much society wants to change and how much risk it is ready to take on,” he added, addressing some 700 political, business and academic experts from Korea and Germany who took part in the 7th Joint Korean-German Conference at the Grand Hyatt in central Seoul.

This year’s conference, under the theme “Science and Innovation,” was organized by the German Embassy in Seoul with the cooperation of the Alumninetzwerk Deutschland-Korea (Adeko) alumni network and other partners, including the German Academic Exchange Service (DAAD).

“Korea is already doing this and has shown a great deal of innovation since it underwent war and division,” he said. “Over the past two generations, it has become modern and democratic and has worked hard and rapidly toward economic progress, amazing the world. Sometimes, Korea’s competitiveness has left Western nations concerned.”

Gauck, who was granted honorary citizenship to the city of Seoul on Tuesday, is on a four-day state visit to Korea.

He warned, however, that “regular people may fear innovation” and that it can “take a lot of time for such ideas and technologies to be introduced to society and accepted.”

“In Germany, innovative plans are transparent, and we try to include the people in this initial planning process,” Gauck said. “This can also cause a lot of strife as well, but talking with the people in the early stages can prevent error and problems in the process.”

“Korea transformed itself from one of the world’s poorest countries into the 13th largest economy in just half a century,” Korean Minister of Ministry Science, ICT, and Future Planning Choi Yang-hee added in his congratulatory speech.

“[The country is] now deploying policies to create an ecosystem of innovation based on a new national vision of a creative economy.”

Over the past 70 years, he continued, “Germans worked side by side with us throughout Korea’s journey toward development. … [The two countries are] extending their partnership in the creative economy and innovation based on our history of cooperation.”

Hwang described ICT convergence services that could potentially be game-changers, including self-driving cars, smart energy, bioinformatics and customized TV shopping. “KT will be at the forefront of bringing in the fourth industrial revolution with cooperation from Germany, which has a number of hidden champions.”

German scientists and industry experts also shared new research and expounded on how division and unification shaped their economy and industries.

Hermann Gerlinger, an executive board member of the 150-year-old German optics manufacturer Carl Zeiss, described how the company went through hard times during the decades of division between East and West Germany. “But Eastern and Western Germany’s will was strong, and we reunified [under one brand in 1991] after the Berlin Wall broke down,” leading to accelerated growth.

“Is everything perfect 20 years later? No, but we are under one brand.”

There are also some 400 cooperative programs between German and Korean universities and research institutes.