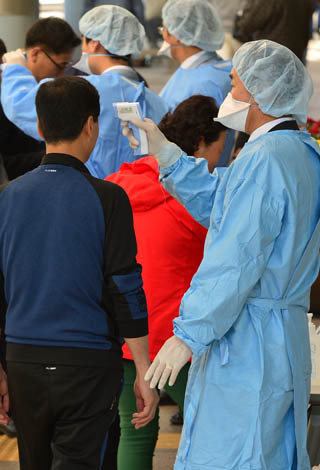 Korea’s final Middle East respiratory syndrome (MERS) patient was re-diagnosed with the disease 11 days after being declared free of it. But a government task force says there is little chance of new infections.

Patient No. 80, a 35-year-old man, is the only former MERS patient in the world to have tested positive for the disease after recovery.

The patient, who has not been identified, was reportedly suffering from lymphoma when he first tested positive for MERS on June 7 and had a weak immune system.

He received medical treatment for 116 days and then tested negative after examinations on Sept. 30 and Oct. 1. Authorities announced he was completely MERS-free on Oct. 1, and that the country could officially declare the end of the outbreak 28 days later on Oct. 29.

The patient was discharged on Oct. 3.

Korea’s MERS outbreak claimed 36 lives and infected 186 people since May 20, making it the largest outbreak outside the Middle East.

But on Monday, Patient No. 80 tested positive again.

In a Monday press briefing held at the Government Complex in Seoul, Yang Byeong-guk, director of the Korea Centers for Disease Control and Prevention, explained that the patient had a high fever at around 5:30 a.m. on Sunday and was immediately sent to the emergency ward at Samsung Medical Center in Gangnam District, southern Seoul. He then was sent to Seoul National University Hospital in Jongno District, central Seoul, that same day around 12:15 p.m.

A total of 61 doctors, patients and relatives who came in contact with the man or were near him in both hospitals were quarantined.

The patient had a fever but showed no signs of coughs or phlegm, which are the usual symptoms of MERS, said Kim Nam-joong, a doctor on the task force from Seoul National University Hospital’s internal medicine department. Kim added that the patient had hemolytic anemia and elevated liver enzymes, which are often linked to lymphoma.

“We believe that a small piece of the MERS virus remained inside his body and was detected in the gene test,” said Oh Myeong-don, who works at the same department as Kim.

Patient No. 80 had apparently tested negative for MERS at other times during his treatment.

“It was the same as two months ago before he was discharged from the hospital,” said Kim. “He went back and forth from positive to negative, and it appears a very small amount of the virogene was discovered this time.”

The task force maintains there is a “near-zero percent” chance that he could spread the disease. It said it would “consult with international experts” about delaying the official announcement of the end of the outbreak, due later this month.

No new MERS patients have been reported since July 6, and a state of emergency that seriously affected the Korean economy was wound down.

The number of people quarantined at home or in a medical facility after coming into contact with MERS patients spiked to nearly 7,000 in June.