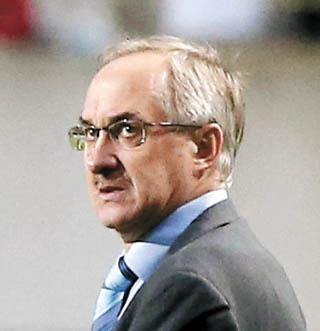 It’s been a year since Uli Stielike became the skipper of the Korean men’s national football team, and many fans will be smiling: So far this year, he has lost only once.

The men’s team delivered their 16th win for Stielike on Wednesday after beating Jamaica 3-0 in a friendly match at Seoul World Cup Stadium.

Stielike’s first game with the national team on Oct. 10 last year against Paraguay ended in a 2-0 victory. Since then, he has won 16 times, lost three and drawn three. This year alone, Stielike’s team has a 14-1-3 record. Among 18 matches, 15 of them finished in clean sheets

“I don’t know the history of
Korean football, but I’m curious whether this kind of record has happened before,” Stielike said after the friendly match against Jamaica.

In terms of a clean sheet, the 60-year-old German is looking to set a new record. According to the Korea Football Association, Korea didn’t allow a single goal in 17 games from July 1990 to Aug. 1992. However, in that period, three different coaches managed the national team.

Considering that three of four matches in the second round of the Asian qualifiers for the 2018 FIFA World Cup is held at home, Stielike can extend his clean sheet.

The national team next month will face Myanmar and Laos, which it already beat 2-0 and 8-0, respectively. If the team manages to collect wins from two matches, Stielike will get 16 wins in 2015 alone. Korea hasn’t collected 16 wins in a single year since 1980.

Stielike became the foreign coach with the most wins after the national team beat Kuwait 1-0 in the World Cup regional qualifiers on Oct. 8.

Stielike knows the team needs more of a challenge.

“We would lose if we play against a stronger team, but we must not be afraid of it,” he said. “In order for us to improve, we need to play more against teams who are unfamiliar to us.”