Finding beauty and happiness in crafts

Finding beauty and happiness in crafts 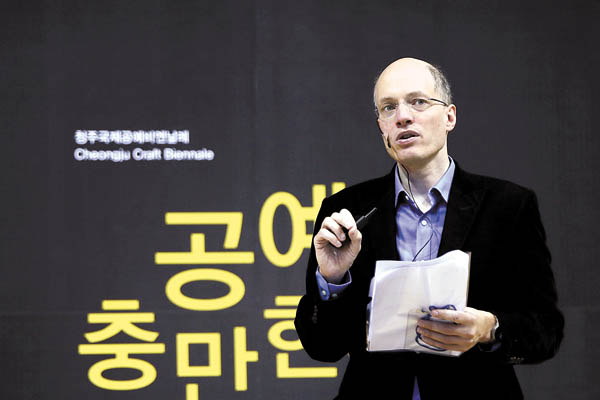 Alain de Botton is one of three artistic directors of the Cheongju International Craft Biennale 2015. Provided by the organizer

Alain de Botton has been an especially popular writer in Korea due to his 1993 book “Essays in Love.” The Swiss-born, U.K.-based philosopher and best-selling writer has further amazed Korean fans by becoming one of the three artistic directors of the Cheongju International Craft Biennale, which is ongoing at what used to be a tobacco processing plant in Cheongju, North Chungcheong.

De Botton curated the special exhibition by working together with 15 Korean artists and came up with craft works that address issues of everyday life. The biennale, which kicked off Sept. 16, runs until Oct. 25.

“Two years ago, the organizers came to me with an unusual suggestion,” de Botton said at a press conference on Oct. 8 in Seoul. “They asked if I could be a curator for a craft fair. I said, ‘Of course not. What a mad idea.’”

But as de Botton thought about it more, he said “it was actually an exciting opportunity,” especially appealing since the organizers said he could do anything he likes.

Under the title “Beauty and Happiness,” the exhibition displays craft works that were created by artists after being given abstract keywords such as nature, elegance, strength, hope, maturity and love.

“I gave an unusual mission for the artists to create craft objects that help us be better, wiser and happier people,” de Botton said. Based on 15 keywords, about 100 craft works have been created by these artists, in an attempt to offer fresh new ways to look at crafts.

“Craft objects are practical and they are things you can put around your house. When you walk around or make a meal, you can just have a look around your house and have a little reminder to be the best version of yourself. That’s what I wanted the project to do,” he said, describing a moon jar in his home in London.

“It sits opposite to where I have breakfast. It whispers to me to be nice to the children, be patient and be clam and that life can be difficult.”

De Botton said that Korean craft can be strong if “it stops being just beautiful” and addresses other topics that modern humans want such as nature, hope love and companionship.

The exhibit’s other two artistic directors are Cho Hye-young and Jeon Byung-sam. Jeon worked on the large CD facade project, in which he plastered the exterior of the main building of the biennale venue with old CDs. Nearly 490,000 CDs were collected from nine countries and it set a Guinness World Record, according to the organizer.