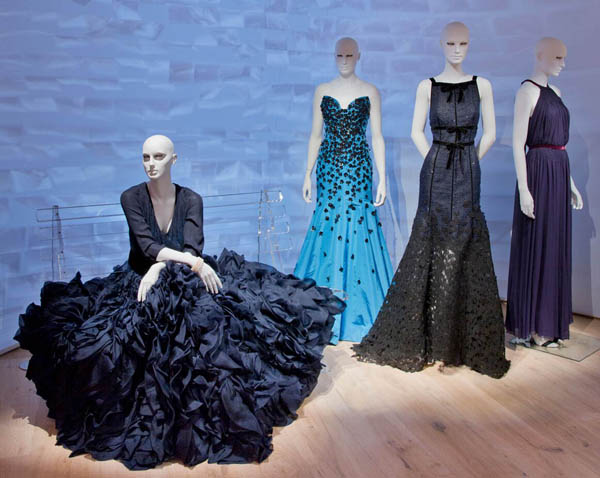 ATLANTA - A new museum focusing on international fashion has opened in Atlanta.

The first exhibition at SCAD FASH features more than 80 Oscar de la Renta designs and opened to the public this month on the Atlanta campus of the Savannah College of Art and Design. The pieces come from the school’s permanent collection and donations from collectors and celebrities who worked with de la Renta before his death in 2014.

De la Renta was a frequent donor to SCAD’s collections and the natural choice for the opening, said Laurie Ann Farrell, executive director of museums and exhibitions and curator of the showing. She hopes visitors whether casual observer or devoted student will learn something about design.

“Everybody selects their clothes as one way of signifying their identity,’’ Farrell said. ``Even if somebody doesn’t consider themselves a fashion aficionado, I think they can come in and be inspired by what different designers have done through the years.’’

The pieces on display in Atlanta until Dec. 31 cover decades of work, from a 1965 black cashmere dress with a white satin collar and waist bow to a silk color-block gown designed by creative director Peter Copping for fall 2015 and worn at the Emmy awards by actress Maggie Gyllenhaal.

Student-docents hold iPads with information about each garment as they guide visitors through the 10,000 square-foot space, winding through curved galleries and small rooms featuring a source of inspiration for the designer. A white, mirrored room contains romantic wedding gowns and a silk-patterned dress inspired by Marie Antoinette while a nearby platform holds a gathering of black and red flamenco-inspired garments with dramatic ruffles and other flourishes.

De la Renta’s technique and influence is the exhibition’s focus, but the people once inside the garments add to each item’s appeal for visitors.

An embroidered silk gown worn by Taylor Swift at the 2014 Met Gala stands next to the entryway. A black and white gown worn by Sarah Jessica Parker at the same event features a large version of de la Renta’s signature embroidered in red near the bottom of the skirt’s cross-hatched train.

In a short hallway holding metallic ensembles, museum-goers bent to examine the intricate beading and embroidery on Hillary Clinton aide Huma Abedin’s custom wedding dress for her 2010 marriage. On the other end of the political spectrum, the exhibit includes a white cashmere coat and dress with delicate beading that former first lady Laura Bush wore for her husband’s 2005 inauguration.

De la Renta received a lifetime achievement award from SCAD in 2001, beginning a relationship with the school. De la Renta donated pieces to SCAD’s permanent collection in the years following the recognition.

Immediately outside the museum doors, SCAD Atlanta’s fashion students have moved into new classrooms and can closely examine or even take apart items from the school’s permanent collection inside a fashion resource library.

Future exhibitions still are being planned, but SCAD officials said they want to provide a link between fashion and film. Both are key areas of study for students in Atlanta and at the main Savannah campus. AP