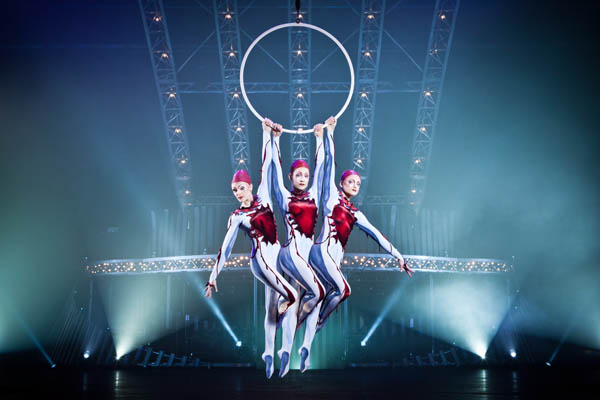 The final tour of Cirque du Soleil’s 20th anniversary show, “Quidam,” is being staged at the Jamsil Sports Complex in southern Seoul. Provided by the organizer

Thursday to Sunday: Georges Bizet’s “The Pearl Fishers,” known as “Les Pecheurs de Perles” in French, will be the Korea National Opera’s season opener. Bizet’s opera in three acts premiered in Paris in 1863. The opera is said to have not been performed as often as others due to its difficult tenor part, yet the singer cast for this production, Jesus Leon, pulls it off beautifully. The remaining cast includes sopranos Nathalie Manfrino and Hong Ju-young, baritones Paul Gong and Je Sang-chul, and bass Park Jun-hyuk.

The show premiered in London in 1973 and debuted on Broadway two years later. For this production, the cast includes Ahn Suk-hwan as the doctor and Nam Yoon-ho as his patient.

Thursday to Nov. 15: The French tour of “Notre Dame de Paris” will hold an encore show commemorating the 10th anniversary since its first performance in Korea. Based on the novel by Victor Hugo that shook Paris with its story of tragic love, greed and madness, “Notre Dame de Paris” depicts the complications that arise between the hunchback Quasimoto, the avaricious bishop Clopin, the alluring gypsy Esmeralda and the royal admiral Phoebus. For this special encore show, director Gilles Maheu and composer Riccardo Cocciante will return and lead an eclectic French-Canadian cast.