Dutch crash out of Euro 2016 finals

Dutch crash out of Euro 2016 finals 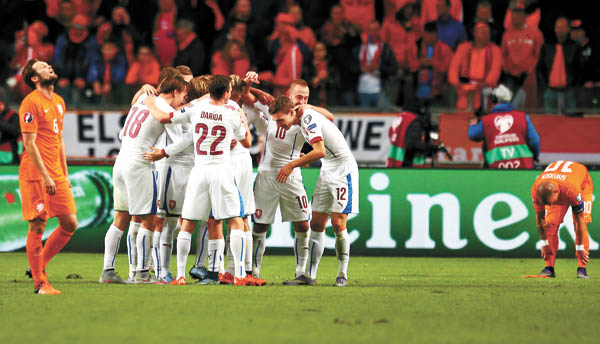 Czech players celebrate scoring their third goal during the Euro 2016 qualifying match against the Netherlands in Amsterdam on Tuesday. The Netherlands lost 3-2 and failed to reach the European Championship. [AP/NEWSIS]

BRUSSELS - The Dutch charmed the world with their free-flowing Total Football during the 1970s. In 2015, they are just a Total Loss.

With a second straight home defeat, with a score of 3-2 to the already-qualified Czech Republic, the Netherlands failed to reach the European Championship finals for the first time since 1984. “We have not been good enough,’’ coach Danny Blind said.

And rubbing salt into that wound, neighbor and perennial rival Belgium moved top of the FIFA rankings and qualified as the Group B winner with a 3-1 victory over Israel.

“Let’s be chauvinists today,’’ Belgium captain Vincent Kompany said. “The Dutch have crashed out and we’re No. 1. Let’s just be proud.’’

While Belgium stars like Kevin De Bruyne and Eden Hazard are heading up, Dutch veterans like Robin van Persie, Arjen Robben and Wesley Sneijder are heading in the other direction.

In this topsy-turvy world, be assured of one thing - always count on Italy. With two goals late in the game, the Azzurri came from behind to beat Norway 2-1, and offer qualification on a plate to Croatia, which went through on a lone Ivan Perisic goal in Malta. The Scandinavians now face the
playoffs.

There was no such hardship for third-place Turkey in the Netherlands’ group. They beat Iceland 1-0 to take the automatic qualifying place for Euro 2016 as the best third-place finisher behind the Czech Republic and Iceland.

Joining Norway in Sunday’s playoff draw are Hungary, Ukraine, Denmark, Sweden, Ireland, Bosnia-Herzegovina and Slovenia. The two-legged series will be staged Nov. 12-14 and Nov. 15-17, with the four winners heading to France next year. AP