Competition over large-size sedans heats up

Competition over large-size sedans heats up 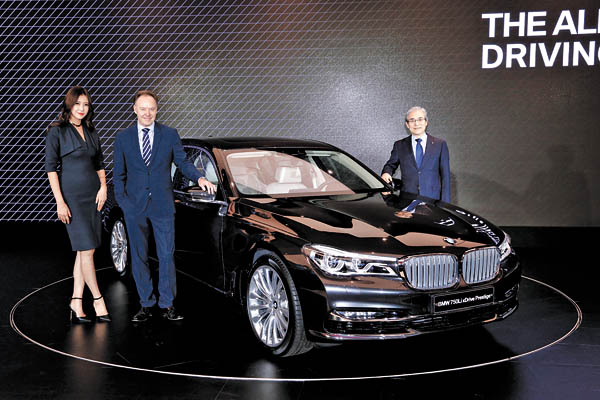 BMW Korea CEO Kim Hyo-joon, right, and Ian Robertson, BMW Group’s chief of sales and marketing, pose with an all-new BMW 7 Series on Wednesday during the media launch event in Incheon. Provided by the company

INCHEON - With three months remaining until the end of the year, automakers’ latest battle is for supremacy in the mid-to-large flagship sedan market.

Among luxury sedans, the new BMW 7 Series has attracted the most attention from industry insiders and Korean consumers. In the launch event held at the BMW Driving Center in Yeongjong Island in Incheon, BMW Korea unveiled the flagship sedan, which has numerous high-tech options. The model is in its sixth generation and took seven years to develop.

“I have no doubt that this new 7 Series will be the most successful in its generation,” said BMW Korea CEO Kim Hyo-joon. “We are proud to inform you that we already have received 1,000 pre-orders prior to this launch event.”

Since flagship sedans are the cars that reflect automakers’ current technology level, BMW spotlighted the high-end features included in the model. Gesture Control, introduced for the first time in the 7 Series, allows drivers to control different features like audio volume and phone calls using specific gestures in the air rather than on a screen.

The new 7 Series was also able to lower its weight by 130 kilograms (287 pounds) from its predecessor by using carbon fiber-reinforced plastics. Safety features, including one that automatically closes the sunroof and stiffens seats in circumstances like collisions, also turned heads.

BMW has been the best import by sales in Korea this year, thanks to its mid-size 5 Series and compact 3 Series sedans. But the large-size flagship sedan segment wasn’t a part of the story, since rival Mercedes-Benz’s S-Class has been dominating the market. Through September, a total of 8,231 S-Class models were sold in the country, compared with only 1,156 of the 7 Series. Considering that the company has already received more than 1,000 pre-orders and many consumers have been waiting for this all-new model to come out, however, sales volume is likely to increase.

“Korea is the fourth-largest market in the world for the 7 Series,” said Ian Robertson, chief of sales and marketing at BMW Group. “We don’t underestimate other cars like the Equus. They will compete with us for sure, but I’m absolutely confident that this new 7 Series will be successful.” The lowest trim, the 730d xDrive, is offered at 131.3 million won ($114,400), and the 750Li x Drive Prestige, the highest trim, is offered at 192 million won including the value-added tax.

But the nation’s leading automaker Hyundai Motor isn’t just sitting back and watching as the German automakers poach Korea’s upper-crust customers. The company will roll out its flagship sedan, the Equus, later this year, which will be its third-generation and the result of six years of development.

According to executives at Hyundai, the company will strengthen its marketing towards people in their 30s and 40s, as the model has traditionally been most popular among consumers in their 50s. The price is expected to be set at around 100 million won.

The competition started earlier this year, as Chevrolet debuted its flagship Impala sedan. With an aggressive pricing scheme making the model about 1.5 million won cheaper in Korea than in the United States, the Impala has been the most popular sedan in the country since it rolled out in August.