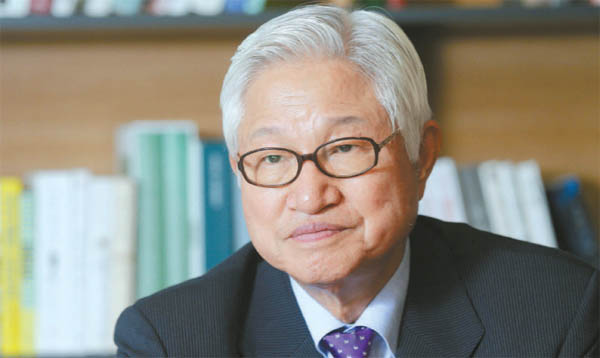 Rhee Shang-hi, Chairman of the Policy Research Committee of the Parliamentarian’s Society of the Republic of Korea


Rhee Shang-hi chairs the Policy Research Committee of the Parliamentarian’s Society of the Republic of Korea, a corporate body funded by the state and composed of former lawmakers. He believes encouraging start-ups using new scientific technologies and developing new industries are the best ways to increase the number of new jobs among Korea’s young generation.

Rhee, 77, graduated from Seoul National University with a degree in pharmacology, served as a four-term lawmaker for the ruling Saenuri Party and is a former science minister.

During his time in the National Assembly, he participated in various activities to enhance scientific technology and nurture fledgling start-ups by young people, mentoring activities he continues today.

Rhee recently sat down with the JoongAng Ilbo to share his thoughts and ideas on job creation in Korea. The following are edited excerpts from the interview:

Q. You have long called for using scientific technology for economic development and to resolve social problems. What kind of action do you think the government should take on these matters?

A. The unhappiest time in Korean history was the transitional period when the country was shifting from an agricultural society into an industrial society. Japan succeeded in its Meiji Restoration and turned itself into an industrial economy, but we protested this trend in history at the time and isolated ourselves from the outside world. The result was colonial rule under the Japanese.

Today, we face another transition, from an industrial era into an era of knowledge. It’s such a crucial moment; if we fail to take proper steps, we will just be repeating history. At the time, we were under the rule of Japan, but now, we could be under the realm of China.

By pushing forward with development into a knowledge-based society, we can achieve economic development and resolve social problems.

For this, we should change our concept of what it means to be talented, and nurture young creative people not for an industrial society but for a knowledge-based society.

Now, China is concentrating on manufacturing to move into an industrial society, so in the meantime, if we boost our productivity through scientific technology - like obtaining more patents - we will be able to find harmony with the Chinese economy. In that situation, Korea becomes the brain to propose ideas, and China becomes the factory, or the body, to realize it.

You previously said the Ministry of Education should change its standard to assess the competitiveness of universities nationwide. How do you think this standard should be changed?

As far as I understand, the current standards for the Education Ministry’s assessment of universities are based on those used during the period of industrial society, which are not suitable for a knowledge-based society.

Those standards mainly evaluate universities’ management, particularly how they score the academic achievements of their students.

I think if we want to move into a knowledge-based society, we should fundamentally change this kind of system. In a knowledge-based society, a university should play the role of “a think tank” for Korea Inc., while the government works as the authority in implementing the ideas that come from the academic realm, and corporations focus on production.

This “think tank” should be assessed by the outcome of their studies. But the current evaluation focuses on universities’ financial statements and facilities on campus.

Is there any case in which universities are evaluated based on their studies?

Although it is not a university, Hitachi, a Japanese company, assesses its employees based on studies. Hitachi is famous for its strict internal audits on all workers, evaluating how they are adapting to changing trends on patent and intellectual property rights.

But in Korea, professors teach what students can simply find on the Internet, and students just memorize the data and write it down on their test papers. On our way to a knowledge-based society, I doubt whether we really need this kind of practice.

What do you suggest as a solution for this situation?

When we look at people like Bill Gates, he considers society a sort of school in which he can learn anything he wants. Universities should develop study circles in which students investigate how to start a business and write their own reports, rather than take a midterm. That way, Korean students can survive in a world where they are pitted against other students raised in the framework of developed education systems like those in Denmark or Israel.

The time when students compete for a higher score on tests is over. We live in a world that focuses on teamwork. We should also trim the time it takes to obtain a master’s or doctorate degree, from the current two or three years to one year, if a student is really talented. That way, students will be more productive and efficient.

In science, which sector do you see as most promising?

I think in a knowledge-based society, we will face a “bio era.” For instance, if a medicine is found that can cure osteoporosis or Alzheimer’s disease, its aftermath would be huge.

We are also faced with a number of social disputes, and we need the skills to mitigate these conflicts.