Bears claw back a historic victory

Bears claw back a historic victory 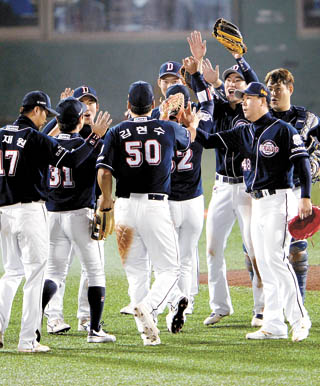 After a dramatic win against the Nexen Heroes Wednesday, the Doosan Bears are entering the second round playoff with confidence to edge the NC Dinos on their path to the Korean Series.

Trailing 9-2 until the end of the sixth inning at Mokdong Baseball Stadium in Seoul, the Bears scored two runs in the seventh and added another in the eighth before collecting a whopping six runs to win the game 11-9 and clinch the best-of-five series 3-1.

It is the first time in the history of the Korea Baseball Organization (KBO) that a team has overcome a seven-point deficit.

“I never thought our players would chase like this and make a comeback victory,” Bears manager Kim Tae-hyung said after the game.

For the Heroes, who won the wildcard series against the SK Wyverns to reach the playoff, it was a sad moment because it was the last time they will play at Mokdong Baseball Stadium, where they have been playing since 2008. Next year, they move to Gocheok Sky Dome, Korea’s first-ever full-dome baseball stadium.

Although Wednesday’s victory is noteworthy, the Bears still have a long way to reach the championship. First, they need to win another best-of-five series against the Dinos before having a best-of-seven Korean Series against the regular season champion Samsung Lions.

Time is on the Bears’ side. By ending the series with the Heroes at Game 4, they can rest for three days before they play their first game against the Dinos on Sunday in Changwon, South Gyeongsang.

However, all signs point to a tight series. First, two teams were tied 8-8 in the regular season. In addition, both managers know each other very well.

But the biggest difference between the two teams is in base-running. The Dinos in the regular season topped in stolen bases at 204. Three players - Park Min-woo, Kim Jong-ho and Eric Thames - have collected 40 stolen bases or more. The Bears had only 111 stolen bases, with Oh Jae-won as the team’s top stealer at 31.

“I know NC got many stolen bases in a game against our team, so I will prepare well after discussing with the coaches,” said Bears catcher Yang Eui-ji.

Another concern for the Bears will be pitching. Although they have lefty ace Yoo Hee-kwan, who went 18-5 with a 3.94 ERA, the Bears are considered to have weak pitching, as they averaged 5.02 ERA in the regular season, seventh in the league.

Making things worse, the team’s foreign pitcher Anthony Swarzak is out due to an arm injury.

Manager Kim Tae-hyung already hinted the American will not be able to play against the Dinos. However, Lee Hyun-seung has been performing well for the Bears in the postseason. The 32-year-old was named the series MVP against the Heroes.

“I know the Dinos’ batting is as strong as the Heroes because they have good players like Thames,” Lee said. “But I’m not a weak pitcher right now. I have some expectations, and at the same time, I’m a little thrilled.”