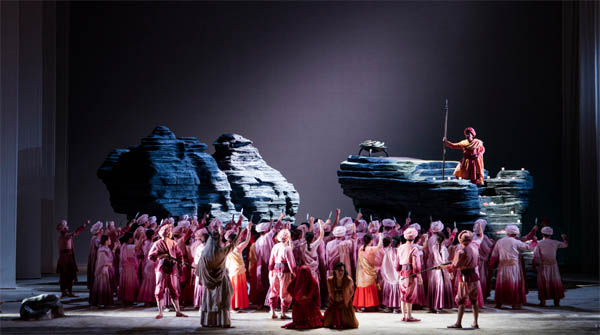 The Korea National Opera is staging the French opera “The Pearl Fishers” at the Seoul Arts Center in southern Seoul until Sunday. KNO

When Georges Bizet’s opera “Les Pecheurs de Perles,” also known as “The Pearl Fishers,” premiered in 1863 at the Theatre Lyrique in Paris, it was said to have been received well by Parisians.

But critics and the press were harsh on the 25-year-old Bizet’s work.

It was only after the composer’s death that the opera entered the repertoire of opera houses worldwide. But it is still one of the more infrequently staged operas internationally, even in France.

“I’ve been performing in France for the past 11 years, and I’ve never performed ‘The Pearl Fishers’ and never seen it being staged,” said baritone Gong Byung-woo, also known as Paul Gong.

But the Korea National Opera has decided to open its 2015-16 seasonal repertoire with “The Pearl Fishers.”

“I am very thankful that the Korea National Opera took the courageous step to stage such great work of opera” said Gong.

“Since I am participating in the performance, I now know why the opera hasn’t been performed so often. It is such a difficult piece for the tenor and soprano that unless singers who are capable perform it, it will not be successful,” he added, explaining that is why tenor Jesus Leon and soprano Nathalie Manfrino are perfect for the roles of Nadir, a fisherman, and Leila, the priestess of Brahma.

Together with some international cast members, Monacan director Jean-Louis Grinda has been invited to take part in the production.

“I’ve known this work since I was a young boy, but it’s my first time to direct it,” Grinda said. “I’ve tried to stick to Bizet’s original work from 1863 and create a stage that resembles his first.” In his point of view, “The Pearl Fishers” is a piece that shows Bizet’s genius, despite being the composer’s first opera piece.

“Because this is a love story, although it also involves two men’s vow of eternal friendship being threatened by this one woman, I’ve tried to make the flow as elegant as possible while making the stage as simple as possible,” Grinda said.

“I believe the Korean audience can witness a true French-style opera.”

“The Pearl Fishers” is set in ancient times on the island of Ceylon. The story revolves around two men whose friendship gets jeopardized when they fall in love with the same woman. The Prime Philharmonic Orchestra will play music under the baton of Italian conductor Giuseppe Finzi.

The opera, which kicked off Thursday at the Opera Theater of the Seoul Arts Center in southern Seoul, runs through Sunday. It starts at 7:30 p.m. tonight and at 3 p.m. on Saturday and Sunday.