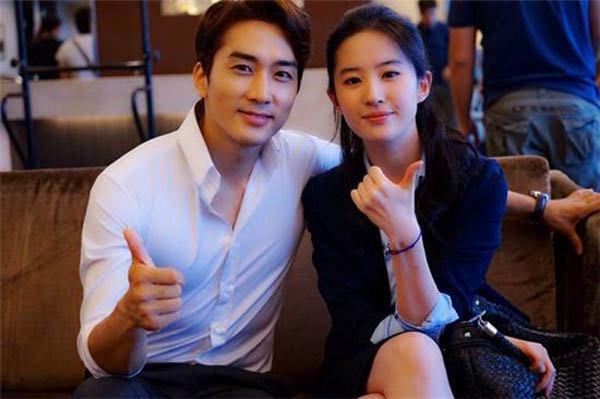 The Chinese news outlets reported Wednesday that Song and the Chinese-American actress visited Liu’s hometown of Wuhan in Hubei province after promoting the film “The Third Way of Love,” in which the two play a fictional couple.

Song reportedly stayed in Wuhan for three days and spent quality time with Liu’s mother at a teahouse.

After the news broke, local news reported about the possibility of marriage for Song and Liu, but the actor’s agency refuted all the speculations.

“They’re seeing each other well, but they don’t have immediate plans for marriage,” said an official from Better Entertainment, Song’s agency. “In addition, Song’s schedule is already full until the end of this year. It is physically impossible to make time for marriage.”

Song and Liu finished promoting their film, but Liu visited Seoul on Oct. 4, a day before Song’s birthday.

Song debuted as a fashion model in 1995 and has been appearing in numerous drama series and films over the past years. His recent works are “Wonderful Nightmare” (2015) and “When a Man Falls in Love” (2013).