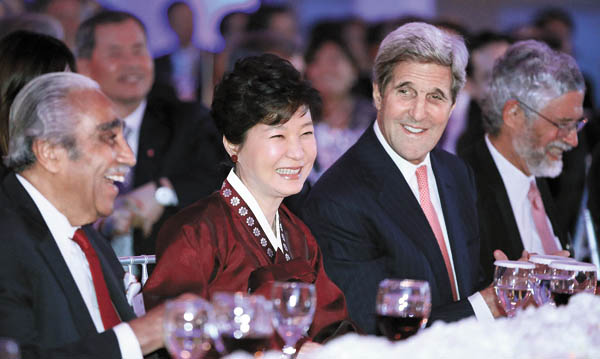 WASHINGTON - President Park Geun-hye emphasized on Wednesday the importance of the Korea-U.S. alliance, calling it a linchpin of Washington’s rebalanced strategy in the Asia-Pacific region and a key to the unification of the two Koreas.

In a speech at a Korea-U.S. friendship gathering, Park said the two countries were bound to each other by common values and the ideals of freedom, democracy and human rights.

“Korea is the most reliable partner of the United States,” Park said, adding that Seoul has put efforts into realizing the American vision to build a better world by hosting various events in conjunction with the United States, such as the Group of 20 Summit, the Nuclear Security Summit and the Global Health Security Agenda meeting.

Park said the alliance was the basis of Korea’s accomplishments over the past decades, and the alliance connected the two countries’ peoples with friendship and trust. “In Korea, there is an old saying that a deeply rooted tree won’t be shaken by winds,” Park said. “The friendship and relations between the two countries will never be shaken by any wind.”

She also stressed that the most important part of the Korea-U.S. alliance’s future vision is the unification of the Korean Peninsula. “The main driving force behind Korean unification is freedom and human dignity,” Park said, urging the United States to share this “grand dream of greater peace and prosperity.”

“We have two governments that each day consult and work closely with one another on issues of vital importance to both of our countries,” he said. “These imperatives include the fight against violent extremism and terror, the pursuit of peace, respect for human rights and the rule of law, and efforts to promote strong and sustainable economic growth.”

“In times that are good and in those that are not so good, our countries have always had each other’s back,” Kerry said.

Kerry expressed his appreciation to Park for having laid a wreath at the Korean War Veterans Memorial, her first activity after her arrival in Washington on Tuesday.

Park arrived in the U.S. capital city on Tuesday for a four-day trip and promoted the Korea-U.S. alliance during her first two days in Washington. The speech at the friendship gathering used the term “Korea-U.S. alliance” 9 times.

Park is scheduled to visit the Pentagon on Thursday, which will be another opportunity to promote the bilateral defense alliance. Park will be the second Korean president to visit the U.S. Department of Defense following her predecessor Lee Myung-bak, who visited the Pentagon in 2011.

Diplomatic observers said the Pentagon visit will ease the growing concerns in the United States that Korea’s foreign policy is leaning too heavily toward China. The concerns deepened after Park chose to attend a big military parade in Beijing in September.

During her Pentagon visit, Park was scheduled to attend a full honor parade and meet with top defense officials, including Defense Secretary Ashton Carter. A meeting with 31 American soldiers who either served or will serve in Korea and five Korean officers studying in the United States was also planned.

“This is a symbolic picture depicting the firmness of the alliance,” a top Blue House official said.

Park will meet with U.S. President Barack Obama on Friday at the White House. North Korea’s development of missiles and nuclear weapons will be the main agenda of the summit, and a strongly worded joint declaration on the issue is expected to be released.