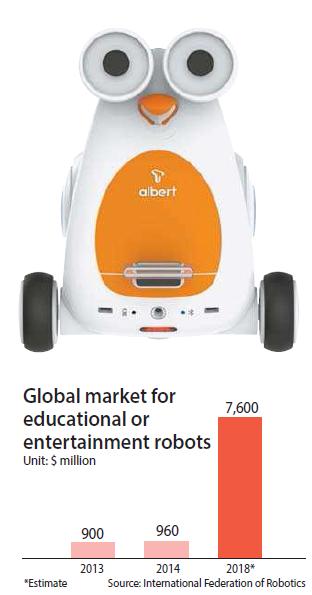 SK Telecom and the government will work together on a project to distribute educational robots to schools in Costa Rica.

According to the Ministry of Trade, Industry and Energy, the two parties reached an agreement with the Inter-American Development Bank (IDB) on Thursday to send some 1,500 educational robots, known as Albert, to 6,000 students and 600 teachers over the next three years.

The first shipment begins this month. Albert is designed to help teach math, including numbers, basic calculations and pattern recognition, among other subjects.

A total of $2.4 million will be spent to train teachers in the region and develop an official education curriculum that utilizes the bot. IDB will spend $1.5 million in developing the curriculum, while the Trade Ministry and SK Telecom will give $750,000 in providing the robots. The Costa Rican government will kick in $150,000 to train teachers.

Albert is designed to carry a smartphone installed with education applications. Depending on which application is operated, the robot can teach various subjects. The bot moves around on wheels and recognizes children’s movements via sensor, which means it can play vocabulary games, read books, give math quizzes and teach software coding.

The robot has been jointly developed and manufactured by a small robot start-up Robomation and SK Telecom. Local game and software developer Zerody was responsible for developing the content and translating it into major languages.

SK Telecom first rolled out Albert in the Korean market in 2012, when it tested out integrating the robot into curriculums for children with developmental disabilities.

After success at home, Albert has been exported to China, Taiwan, the United Arab Emirates and Brazil, and countries like Malaysia and France are testing curriculums that include the robot.

“IDB is planning to expand the math education program using the Albert robots to other Central and South American countries after evaluating the Costa Rica project this time,” an official at the Trade Ministry said.

According to the International Federation of Robotics, the global educational and entertainment robot market is estimated to reach $7.6 billion by 2018, drastically growing from $900 million in 2013 and $960 last year.