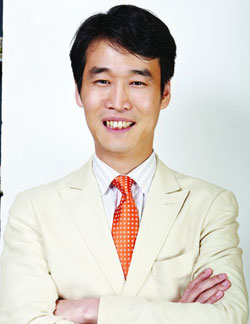 This piece won the Best Meal award in the 2015 World Canstruction competition. Canstruction.org

Park Sang-min is a fan of “canstruction,” a type of competition in which participants use cans to build sculptures and other installations.

“These events are good for developing students’ creativity and helping in children’s personal development,” said Park, an elementary school teacher who has worked with young people for 19 years.

The 42-year-old is current preparing for the opening of Canstruction Seoul 2015, which kicks off next month, the first in Asia. He obtained a license to hold the event in February.

“I saw a canstruction event when I was working at the southern education office under the Seoul Metropolitan Government,” he said. “At the time, I was … looking for ways to help develop creativity in students, and I realized that making art using cans could certainly help.” 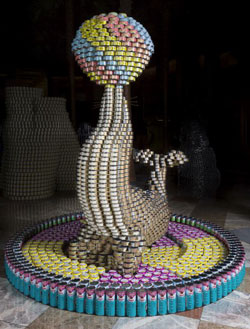 Canstruction, established in 1992 in the United States, has grown over the past 20 years into a worldwide event in which people from about 150 cities participate. The events are also philanthropic.

After the displays are taken down, the cans used in the competition are donated to people in need. About 50 million kilograms (55,000 tons) of food are donated to those struggling under the poverty line.

“If we only told children to be creative in these competitions, it wouldn’t be helpful in their personal development since it’s a competition,” Park said. “Learning to be creative can be achieved through sharing ideas and cooperating with your teammates. Once the [canned food] display is distributed to people in need do they have the chance to see the true meaning of helping others.”

While construction is important in the competition, more significant is how many types of canned goods are used in creating a piece.

The public also votes for the best piece through social media.

Canstruction Seoul 2015 will be held Nov. 28 and 29 at the Gwacheon National Science Museum, where 10 professional teams made up of adults and university students and 20 junior teams consisting of middle and high school students will compete.

The organizing body receives draft drawings for each structure to determine which teams will participate. Each professional team gets 12 hours to complete their projects, while the junior teams each have eight.

“There are so many colors used in the exterior design of canned goods,” Park said. “I hope the event can be a stage for students and adults to display their creativeness.”

Park, a teacher at Kaewoong Elementary School in Seoul, and his students won the 2009 Odyssey of the Mind competition, a creative problem-solving event - the first time by a Korean team.

“I hope I can be like a big brother who can mentor young students in the future,” he said.