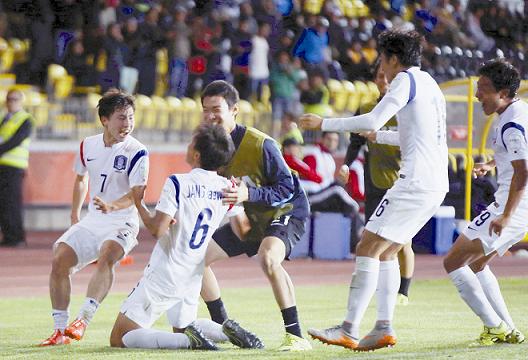 Jang Jae-won, second from left, celebrates with teammates after scoring a goal against Brazil at their Group B match at the FIFA U-17 World Cup held at the Francisco Sanchez Rumoroso stadium in Coquimbo, Chile on Sunday (Korean time). [Korea Football Association]

Korea stunned Brazil at the FIFA U-17 World Cup in Chile on Sunday with a 1-0 victory as the young Taegeuk Warriors cruised to the top of Group B.

At the Francisco Sanchez Rumoroso stadium in Coquimbo, Chile, Korea collected its first victory of the tournament, thanks to a goal form Jang Jae-won in the 79th minute. Korea moved to the top of their group while England and Guinea drew 1-1.

This is the first time the men’s football team has beaten Brazil in a FIFA tournament at any age level.

In the previous six encounters at the U-17 level, Korea had one draw and five losses. Under coach Choi Jin-cheul, Korea lost 3-0 in August last year and 2-0 in September.

“We managed to set our game tactically,” coach Choi said on FIFA.com. “Players sacrificed themselves for the team and their partners. We have worked hard to be ready physically and it paid off against Brazil.”

Brazil, the three-time champions of the tournament, controlled the match with most ball possession from the start, but Korea’s defense was tight, while the team looked for an effective counter attack. Both teams made had nine shots-on-goal, but Korea saw five shots on target, while Brazil only had one.

In the 9th minute, Lee had a chance to put Korea ahead after he tried to take the rebound from Kim Jungmin’s shot that was blocked by Brazilian goalkeeper Juliano.

In the 21st minute, Lee also made a shot following up the Park Myeong-soo’s free kick that was blocked by Brazilian defenders, but failed to find the target.

The match got tighter in the second half, but Korea had to make an unexpected change as defender Choi Jae-young was replaced by Lee Seung-mo due to injury.

Failing to make a single shot on the target in the first half, Brazil made some changes early in the second half, playing Matheuzinho instead of Leandro from the 54th minute and replacing Liziero for Arthur in the 69th minute. However, it was Korea which broke the 0-0 deadlock. Just a minute after the team replaced Park Sang-hyeok to Lee Sang-heon, Korea produced the match’s only goal starting from midfielder Kim Jin-ya who dribbled past two Brazilian defenders on the right flank and passed the ball to Lee Sang-heon in the box.

Jang has had only one goal in 26 matches in previous U-17 matches.

“I’m not a player who does fancy plays, but I’m happy that my goal shined as it helped our team and my teammates get a win,” Jang said.

Brazil put Eron in the 82nd minute replacing Luis Henrique to get equalizer, but Korea’s defense was still strong.

Making things worse for Brazil, which is considered as one of the top favorites for this tournament, Geovane was sent off for kicking substitute Lee Sang-heon in the 86th minute, making them a 10-man until the final whistle.

“It was a very difficult match against the Korea Republic team that has done very well against us,” said Brazil coach Carlos Amadeu to FIFA.com. “They defended strongly and prevented us from approaching their goal.”

Korea, which is having fifth appearance at the FIFA U-17 World Cup, will meet Guinea on Wednesday morning (Korean time) for their second straight win in the Group B. In this tournament, where 24 nations compete, the winners and runners-up of each group and the best four third-placed teams advance to final 16.