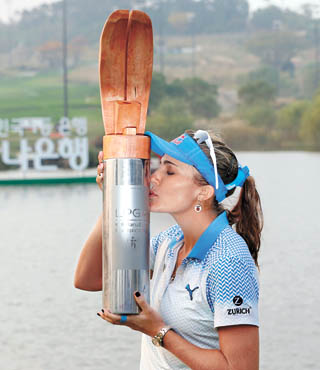 Lexi Thompson kisses the trophy after winning the LPGA KEB-Hana Bank Championship at the Sky 72 Golf Club in Incheon on Sunday. [AP/NEWSIS]

American Lexi Thompson won the 2015 LPGA KEB-Hana Bank Championship to get her second win of the season.

At the Ocean Course of the Sky 72 Golf Club in Incheon, Thompson shot 3-under 69 to close the event at 15-under 273 to beat Yani Tseng of Taiwan and local sensational Park Sung-hyun by one stroke. This is her sixth career win in the LPGA Tour and her second of the season after taking the Meijer LPGA Classic in July.

The 20-year-old, who entered the final round tied in third place, became the first American to win the LPGA KEB-Hana Bank Championship and fifth foreigner to win the only LPGA event held in Korea.

While Thompson captured the trophy and $300,000, another golfer who received the spotlight was Yang Hee-young (Amy Yang) who tied the LPGA Tour record for most consecutive birdies in one round on Sunday.

Yang fired 10-under 62, including nine straight birdies in the last nine holes, and shared fourth place at 13-under. She started the final round tied in 31st position.

Yang, who has two career LPGA wins, is the second golfer in LPGA history to record nine straight birdies after Beth Daniel at the 1999 Philips Invitational. Yang’s 62 in the final round matches the course record.

Receiving avid support from the home crowd, Park had an impressive LPGA Tour event debut. The 22-year-old, who has three wins in the KLPGA Tour this season and is second in money rankings, entered the final round as a co-leader with Lydia Ko. She shot 1-under 72 on Sunday to share second place with 2011 champion Tseng.

Park would have been the fifth Korean player to grab the LPGA tour card by winning this event. She said on Saturday that she will try to play in the U.S. starting in 2017.

Ko missed a chance to take the top spot in the world from Park In-bee. The Korea-born Kiwi shot 72 and tied fourth with Yang and Gerina Piller.

World No. 1 Park In-bee tied 15th at 8-under with Chun In-gee and four other golfers.