Budget airlines are spreading their wings

Budget airlines are spreading their wings

Like a David and Goliath contest, the nation’s two flag carriers face plucky new rivals: the low-cost carriers (LCCs). The upstarts first challenged the main carriers on price, then by offering better food. Their next move is offering international flights from local airports.

T’Way launched flights from Daegu to Guam in Oct. 1, its third international flight following services to Shanghai and Osaka from Daegu. After T’Way’s expansion, Air Busan opened routes from Busan to Guam; Danang, Vietnam; and Yanji and Zhangjiajie, in China. The airline will start a Busan-Sapporo service by the end of this year.

“Now we save travelers who live far from Incheon or Gimpo international airports and who hope to travel to Guam the trouble,” said Hahm Chul-ho, CEO of T’Way. Largely thanks to T’Way and its international flights, 1.33 million passengers departed from the Daegu International Airport from January to August this year, a 40 percent year-on-year increase.

Budget carrier Easter Jet began a new route from Jeju Island to Bangkok on the same day T’Way started its route to Guam. It runs seven flights per week, a total of 67,000 seats annually.

“Our services have an average occupancy rate of 98 percent, showing strong competitiveness,” said Kim Jung-shik, CEO of Easter Jet. “We are providing both residents of Jeju Island and Southeast Asians an easily accessible route to experience exotic places.” Based at airports in Cheongju, North Chungcheong, and Gunsan, North Jeolla, the carrier operates international flights to Shanghai, Hong Kong, Yanji, Dalian and Harbin.

Easter Jet will expand by opening more routes from Incheon to Okinawa, and from Busan to Osaka and Bangkok by end of this year.

The No. 1 budget airliner, Jeju Air, has 24 international routes to countries such as Japan, China and Taiwan. It is expanding aggressively will start operating services from Busan to Okinawa and from Incheon to Danang by the end of this year.

Jin Air is even more ambitious. The company has shattered the stereotype that budget airliners only fly routes less than five hours long. Jin Air generated a lot of buzz by offering round-trip flights from Incheon to Honolulu for 600,000 won ($530) to 800,000 won.

With flights from Cheongju, Muan, Daegu and Jeju airports, the competition in the niche market is heating up among Korea’s low cost carriers (LCCs). Their share of the total number of flights from Korea to foreign countries increased to 13.2 percent in the first half of this year. [JOONGANG PHOTO]

Jin Air runs flights from Busan to Cebu and Osaka and from Jeju to Shanghai and Xi’an. The carrier will further expand its international flights from Incheon to Danang, Kalibo (Boracay), Phuket and Hanoi.

“I don’t have to go to Incheon International Airport to take short trips,” said Choi Ah-young, 28, who recently used an LCC to go on a trip to Osaka from Busan. “LCCs’ marketing strategy is kind of like how a national professional baseball team attracts local fans,” said Hurr Hee-young, a business administration professor at Korea Aerospace University. “LCCs are focusing on expanding their business to local airports that are avoided by the two major airlines because they can lead to losses.”

Success has encouraged the top two LCCs, Jeju Air and Jin Air, to increase their numbers of planes. Jeju Air, which had 17 aircraft until last year, purchased three more B737-800 planes, the largest number among domestic LCCs. 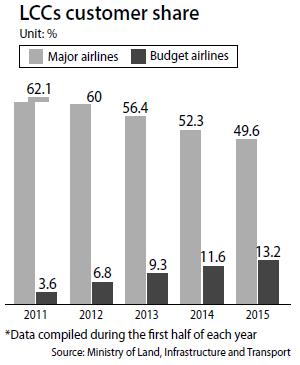 Jin Air will purchase six aircraft by the end of this year, the largest number the airline has purchased since it started.

“We have fewer planes than Jeju Air, but we have a similar number of total seats,” said a Jin Air official.

As competition among the budget airliners gets intense, various marketing strategies to attract travelers are being used.

Jeju Air provides departure lounges at overseas airports in Guam and Saipan for its customers. Also, teaming up with local businesses, the airliner provides hotel and rental car services.

“This is the first travel package provided by a LCC in domestic airline history,” said an Air Busan official. 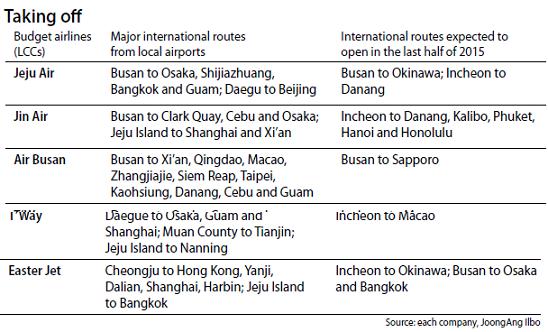 Easter Jet is in the process of developing a hotel near Cheongju International Airport.

Korean Air and Asiana Airlines used to monopolize flights to Guam and Saipan, but now LCCs pose a clear threat to their long-distance international services.

In the first half of 2011, flights to foreign countries by the nation’s top five LCCs - Jeju Air, Jin Air, Air Busan, Easter Jet and T’Way - made up 3.6 percent of all international flights. The rate surged to 13.2 percent by this year’s first half.

Meanwhile, the share of international flights by the two major Korean airlines fell from 62.1 percent to 49.6 percent during the same period. This is the first time their share fell below 50 percent.

LCCs’ expansion in the domestic aviation market will continue. Other than the five domestic LCCs, there are 20 foreign budget airlines in the market. Plus, Asiana Airlines will establish its second LCC, named Seoul Air, to pick up unprofitable routes that the nation’s biggest airline has avoided.

The company will soon establish Seoul Air as a separate corporation and expects to acquire a flying license from the Ministry of Land, Infrastructure and Transport within this month.

While LCCs aggressively expand their business, some critics warn them to take a closer look at how the country’s two biggest air carriers have lost price competitiveness.

“They need to carefully evaluate the future variables that can get in their way since immense numbers of LCCs’ from China have yet to enter the domestic aviation industry,” said Professor Hurr. “Domestic LCCs need to look at their price competitiveness and long-term profitability.”