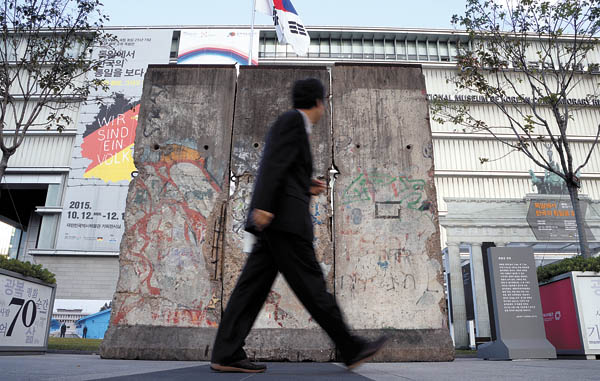 A man walks by a piece of the Berlin Wall outside the National Museum of Korean Contemporary History in Jongno District, central Seoul. [NEWSIS]

There are supporters and opponents of Korean unification, and many ideas of how unification should happen.

But arguments on both sides often look to Germany.

A new exhibition at the National Museum of Korean Contemporary History attempts to show just how West Germany (the Federal Republic of Germany) and East Germany (the German Democratic Republic) became one again. 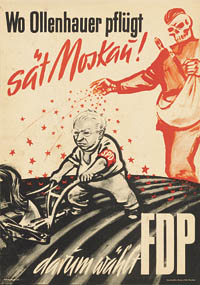 The exhibition includes propaganda posters from both West and East Germany; items Eastern Germany’s secret police used to conduct surveillance on the people; and articles of East Germans who attempted to flee to the West. Alongside these, the exhibition also displays documents, photos and other articles related to South and North Korea.

But the highlight of the show is a piece of the Berlin Wall on display outside the museum. Berlin donated the 3.6-meter-tall (11.8-foot) chunk of the wall, which was dismantled in 1989, to Seoul's Jung District Office in 2005. The wall bears writings on the western side by people there who yearned to see their families on the other side. 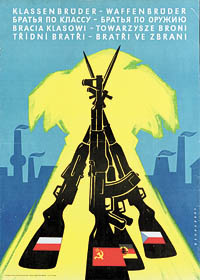 “We often talk about German unification, but how many of us really know the details of the process?” museum director Kim Wang-sik said. “Through this exhibition, I hope visitors learn that German unification was possible because of the German people’s yearning for freedom and peace as well as wise diplomacy that induced cooperation from interested countries.”

“Implications of German Reunification for Korean Unification” runs until Dec. 13 at the National Museum of Korean Contemporary History. Admission is free. Hours are between 9 a.m. and 6 p.m., but extended on Wednesdays and Saturdays to 9 p.m. The museum is closed on Mondays. The museum is near exit 2 of Gwanghwamun Station on line No. 5. Call 02-3703-9200, or visit www.much.go.kr.