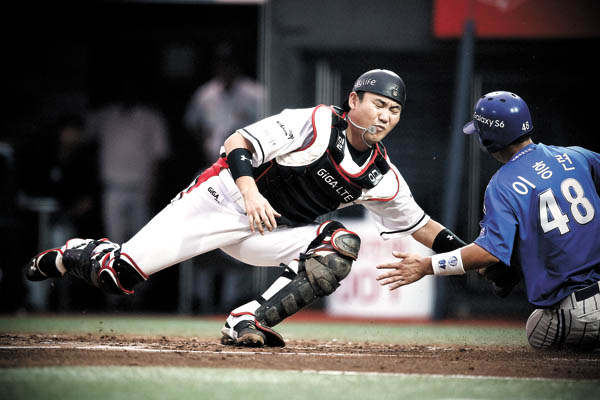 While the KBO League playoffs are in full swing, scandals involving players are overshadowing what should be the exciting culmination of the season.

KT Wiz, released a statement on Friday that contained an apology by catcher Jang Sung-woo after his ex-girlfriend published private conversations on social networking sites which apparently slandered other baseball players and coaches, as well as a Lotte Giants cheerleader.

“I know it’s shameful to say, but it has been a strange week which I couldn’t control. I’m sorry,” Jang said. “If I could rewind time, I would go back to the day I had no pain.”

Jang, 26, became the hottest pro player in the online community last week after his ex-girlfriend unveiled their conversations. Jang apparently slandered other baseball players and coaches and made sexual comments about cheerleader Park Ki-ryang.

The cheerleader filed defamation charges against Jang and his ex-girlfriend on Tuesday, saying all of the statements involving her are untrue.

In an interview with Ilgan Sports, an affiliate of Korea JoongAng Daily on Sunday, the cheerleader said there will be no forgiveness.

“I don’t have to and I don’t want to forgive [them],” Park said. “This is not only a problem of my own. In baseball, there are many female workers like cheerleaders, reporters and bat girls.”

The Wiz said that the club’s punishment for Jang will be determined after the court case is resolved. However, the club has been criticized for issuing an apology too late.

A team official said, “The apology statement was prepared before Park filed the charges, but it took some time since the player had to write with remorse.”

While the Wiz is dealing with the issue, local channel TV Chosun alleged last Thursday that some Samsung Lions players have been involved in illegal gambling overseas.

The players who are suspected of illegal gambling are reportedly all pitchers.

The station said that while prosecutors were investigating illegal gambling by local businessmen, they found a list of gamblers which included some Lions players.

Though prosecutors have not confirmed their investigation, Seoul Metropolitan Police Agency said on Saturday they have launched their own investigation into two Lions players over illegal gambling.

The issue comes at a critical time for the Lions, as they are looking for a fifth straight championship. As regular season champions, the Daegu-based club is in the Korean Series, waiting for the winner between the NC Dinos and the Doosan Bears.

The Lions have a history regarding players involved in gambling. In 2008, 13 former and active Lions players were investigated for illegal online gambling and three were indicted. They were later fined.

The Lions said team training is on schedule for the Korean Series, but they are faced with a dilemma of whether or not to put suspected players on the final squad of the best-of-seven championship series. The team has to submit the roster for the series to the KBO by Sunday.

The Lions have been strict on players’ misconduct. Last August, when outfielder Jung Hyung-sik was caught drunk driving and the team banned him from playing.

Following the latest alleged incidents, the team is acting carefully with the championship at stake.

The Lions said they will look into the allegations, but have not yet taken any action since the police have not formally notified them of any illegality.

“At this point, we can only say that we are checking the facts and talking with players,” the Lions official said.