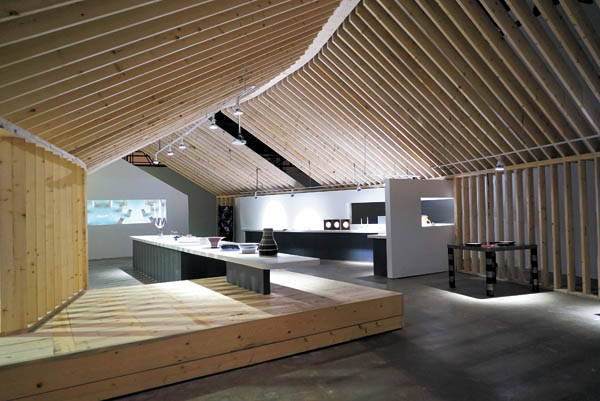 GWANGJU - Korea’s sixth-largest city has been working for the past few decades to reinvent itself as a city of art and culture.

Ironically, however, none of the design products introduced at the past five design biennales, which were so eager to cast Gwangju as a city of design as well as boost local small- and medium-sized enterprises, have been turned into actual commercial products.

During the last Gwangju Design Biennale in 2013, organizers excitedly announced plans to produce new unified Gwangju taxi driver uniforms, through the joint effort of participating designers and local companies, after holding a public vote to choose from among the five uniforms on display. However, the project was never realized.

“The Design Biennale is not a festival,” said Woo Bom-ki, Gwangju’s vice mayor of economy, during a press conference at the biennale venue on Thursday before the event kicked off its sixth installment that evening.

“It’s the future ... of Gwangju’s industry,” he continued. “There have been five Design Biennales before this one and I have to admit that so far there have not been any design products that have actually been commercialized.”

That is why this year’s installment began its month-long run with the aim of creating design products that are “realistically viable,” Woo explained.

The Sixth Gwangju Design Biennale got off to a rough start: The budget was slashed to 23 billion won, or half that of the previous biennale; the duration was shortened from two months to one; and there was a delay in appointing a general director.

Choi Kyung-ran, dean of the Graduate School of Techno Design at Kookmin University, was eventually given the leadership role.

With this year’s event titled “Design ‘Shin-Myeong’,” which roughly translates to “Conviviality with Design,” Choi said she hopes that “the Gwangju Design Biennale will be reborn as a cultural asset of East Asia through convivial design.” 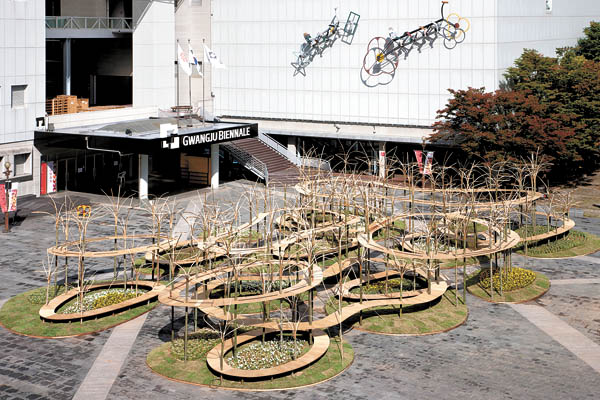 “I expect this year’s biennale to act as a turning point that serves as a new driving force for the future vision of Korean design in the rapidly changing global design environment,” she said. “Design has changed its function and role according to the times, and this means design changes according to the changes of the times and that the Design Biennale has to change in a way that suits such social changes.”

To differentiate this year’s event from previous ones, Choi made sure that the featured designs could instantly go on sale after the biennale.

In particular, designs on display in the first exhibition hall, “Gwangju Branding - Fusion Between Eastern and Western Values,” are the ones that are “sure to be commercialized,” according to Choi.

On display are lamps, kitchen tools, tableware, water bottles and the like from world-renowned designers such as Stefano Giovannoni and Alessandro Mendini, together with those from local production companies.

In the second section, “Cultural Values of Korea, China and Japan - Asian Design Hub” visitors can see and compare the designs from the three neighboring countries. Choi said she especially agonized over how to differentiate what’s on offer from each country in this exhibition hall.

Kitchen and living pieces from a total of 99 designers are on display in this section, with different themes for each country: wind for Korea, flowers for Japan and water for China.

In the third section, “Sharing in Everyday Life with Digital,” Choi said she wanted to clear out a space for the public. 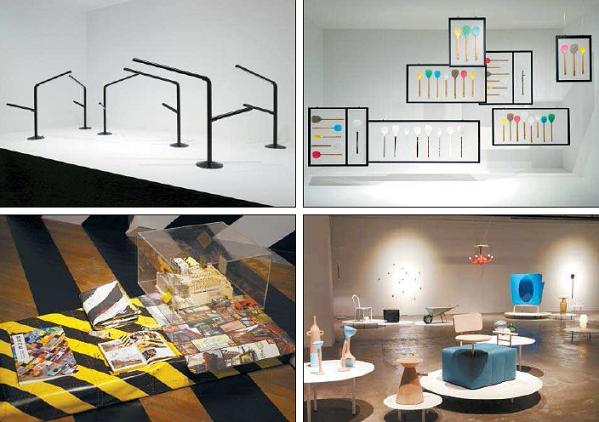 “I’ve heard some criticisms that there was no place for people to sit down, rest and chitchat at the venue,” she said. But in addition to chairs, the third exhibition hall is full of designs and artworks to enjoy, with pieces by 3,030 citizens of Gwangju who participated as artists.

The local participants collaborated with professional designers for the “Design Flower Project,” and visitors can see their works displayed on a large screen installed in this hall. Presentations and forums by designers will also be held from time to time during the biennale for the pubic at this exhibition hall.

In the section titled “The New Italian Design,” visitors can be inspired by Italian designs that fill up the vast 1,653-square-meter exhibition hall, while in the “Design R&D” section they can witness the future of design.

“These two final sections are perfect for young students who wish to become designers in the future,” Choi said, “as well as those who work in this industry.”

Despite the cutbacks in time and budget, this year’s Gwangju Design Biennale isn’t lacking, and may turn out to be the most successful one yet by bringing forth a commercialized product.

Giovannoni, who is participating in the event as one of the designers as well as a curator, noted the unique qualities of the Gwangju event compared with design fairs elsewhere.

“Usually design exhibitions are exhibitions where you see some things which were already presented to the public [at other events],” he said. “In this case, that’s not it. It attempts to connect local companies, local industries and local and international designers. I think it’s a completely innovative direction and very interesting and fruitful for the future.”


The 6th Gwangju Design Biennale runs through Nov. 13 at the Gwangju Biennale Exhibition Hall. It is open every day from 9 a.m. to 5:30 p.m. Tickets cost 4,000 won for children, 6,000 won for youth, and 10,000 won for adults if purchased at the door. Tickets are cheaper if purchased in advance. For more information, visit www.gwangjubiennale.org.