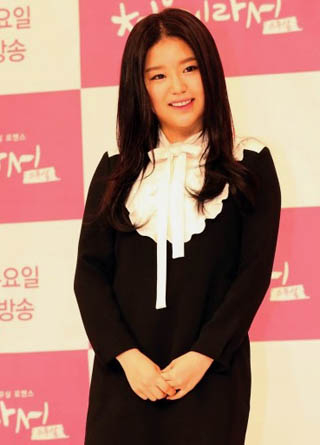 Actress Cho Hae-jung has landed the female lead in the upcoming drama series “Imaginary Cat,” in which she will pair up with actor Yoo Seung-ho.

In the drama series, which is based on the web cartoon series of the same name, Cho will play the role of Oh Na-wu, who falls in love with Hyun Jong-hyun, played by Yoo.

The character of Cho has been suffering from loss since she lost her cat, but she finds herself being comforted by Hyun, another cat lover, who distances himself from the people around him.

By raising cats, Hyun and other characters in the story begin to learn how to communicate with others.

After the news of Cho clinching a role in the new drama series became public, some Internet users criticized the budding actress for taking advantage of her father’s popularity.

The veteran actor and his daughter are currently appearing on the popular reality TV show “Take Care of My Dad,” in which celebrity fathers in their 50s and 60s spend time with their daughters to improve their relationships.

When the father-daughter duo began appearing in the show, Cho Hae-jung was an obscure actress who was struggling to get parts, but she recently nabbed two roles - a supporting role in the drama series “Because it’s the First Time” and a lead role in “Imaginary Cat.”

“Imaginary Cat” will hit the air in November.