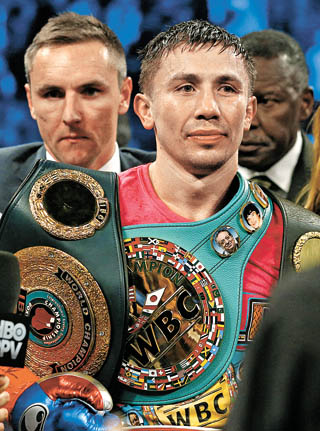 NEW YORK - Gennady Golovkin gave a slight bow and apologized to David Lemieux after hitting him while he was on the canvas in the fifth round of their middleweight title fight.

Golovkin could afford to be magnanimous. Everything else he did was nearly perfect Saturday night when he staked his claim as boxing’s best before a sold-out crowd at Madison Square Garden.

In a coming out party of sorts, Golovkin battered Lemieux at will before referee Steve Griffith mercifully stopped the fight in the eighth round with the Canadian taking a beating on the ropes.

It was yet another impressive performance from a fighter many are starting to notice as he knocks out almost everyone who steps in the ring with him.

More important, it sets up a possible bout that has boxing fans salivating: “Triple G” against the winner of the Nov. 21 middleweight title clash between Canelo Alvarez and Miguel Cotto.

“This fight puts him at the next level,’’ promoter Tom Loeffler said. “He’s at the top of the sport. There’s probably only one other fighter now who can fill Madison Square Garden and that is Cotto.’’

The bout wowed a crowd of 20,548 that included Republican presidential candidate Donald Trump. Former middleweight champion Bernard Hopkins has seen a lot in his years in the sport, and believes the man who beat the fighter he was promoting is something special.

Golovkin was both those things against Lemieux, taking his time in an efficient performance that saw him land 51 percent of his punches. Most of those landed crisply, and took their toll as the rounds added up.

With Triple G, of course, the knockout is everything. And while Lemieux was still standing in the eighth round, he became the 21st straight fighter Golovkin has stopped within the distance.

“I felt his power, but I was strong tonight,’’ Golovkin said. “My punches hurt him.’’

Lemieux, who brought a piece of the middleweight title into the ring, complained afterward that the referee stopped the fight too quickly while he was still on his feet. But Golovkin had won every round on all three ringside scorecards, and the wild rights that Lemieux was hoping would turn the fight around never landed solidly.

When the fight was over and the punches had been tallied Golovkin had landed 280 punches to 89 for Lemieux. It was Golovkin’s first pay-per-view bout. AP