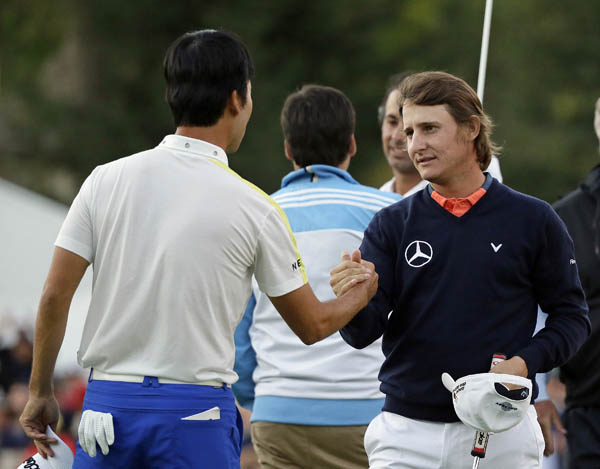 Emiliano Grillo, right, is greeted by Kevin Na on the 18th green of the Silverado Resort North Course after winning the Frys.com golf tournament Sunday in Napa, Calif. Grillo won the tournament on the second playoff hole. [AP/NEWSIS]

NAPA, California - The two lasting images of Emiliano Grillo in his PGA Tour rookie debut were both misses.

And then he made the one putt he could afford to miss.

“This is the greatest moment in my life in golf,” the 23-year-old Argentine said Sunday after his playoff win in the Frys.com Open.

Grillo was trying to move up the leaderboard Saturday afternoon when he was told on the 296-yard 17th hole that the green was clear. His tee shot was just left of the green, and only later did he realize it came within inches of hitting Rory McIlroy.

That was a good miss.

McIlroy, who struggled all week with his putter, joked later it would have “put me out of my misery” if it had hit him.

Grillo said he thought about running over a few fairways to find him for an apology, but his thoughts were occupied by another matter. First, he rolled in a 25-foot birdie putt on the par-5 18th hole for a 3-under 69 that eventually landed him in a playoff with Kevin Na, who birdied the 18th for a 70.

On the first extra hole, Grillo looked like a winner when he hit a chip shot across the 18th to 3 feet above the hole, and Na had a long two-putt just to make par. Step over the putt, rap it and the kid would be a PGA Tour winner in the season opener.

The momentary shock came from a putt the same distance that he missed seven months earlier in the Puerto Rico Open that cost him a chance to win, and he lost in a playoff. He later said that miss gave him nightmares for a week. “One of the most painful times of my life,” he said.

After what seemed like a long drive back to the 18th tee for a second playoff hole, the Argentine gathered himself. Even after two mediocre shots, he delivered an aggressive approach to just under 10 feet.

And the next mistake belonged to Na.

After getting a reprieve with Grillo’s missed birdie putt, he was in the 18th fairway and chose for the second time to hit a driver off the deck. It worked out fine on the first extra hole, not so much on the second. Na hooked it so far left that a tree blocked his path to the green. He hit a wedge onto and over the green, chipped well past the hole and made a bogey. Grillo only needed two putts for the win.

He made it, throwing both arms in the air.

Na defended his decision to hit a driver from the tight grass on the fairway, suggesting in a brief Golf Channel interview that maybe it was getting darker or the ball was slightly above his feet, but he probably would have hit the same shot again. Na walked away with $648,000.?

Born in Argentina, groomed for golf in Florida, Grillo earned his PGA Tour card about a month ago and capped off his Web.com Tour season by winning the final event by making a 25-foot putt on the final hole. Two weeks later, another 25-foot birdie putt on the 18th hole sent him soaring.

A two-year exemption. A check for $1.08 million. And the one magical word that made him smile.

He’s going to the Masters.

“It means everything. They’ve said the word ‘Masters’ twice today. You see this?” he said, pointing to a smile as bright as the silver trophy on the table next to him.?

The best prize was the trophy for Grillo, especially after what nearly happened on Saturday.

“I didn’t want to be the guy who almost hit Rory McIlroy this week,” Grillo said. “Kind of wanted to have this trophy and everybody know me because I have the trophy, and not because I almost hit him.” AP