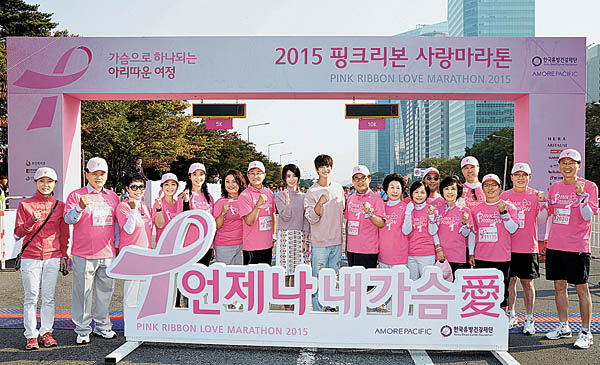 On Oct. 18 in Yeouido Park, the 2015 Pink Ribbon Love Marathon in Seoul was successfully held in commemoration of breast cancer awareness month, which runs throughout the month of October.

Organized by AmorePacific and hosted by the Korea Breast Cancer Foundation (KBCF), this marathon was planned to provide information concerning breast health and emphasize the importance of self-diagnosis in treating breast cancer.

The Pink Ribbon Love Marathon, which celebrates its 15th birthday this year, is a major event in AmorePacific’s Pink Ribbon Campaign, which aims to inform how dangerous breast cancer can be and acknowledge the importance of regular check-ups, considering breast cancer is the most common cancer among Korean women.

The marathon looked more like a “pink festival,” with its nearly 10,000 contestants all wearing pink shirts and enjoying different booths set up by sponsors that included Facebook and Kumho Tire, as well as AmorePacific brands such as HERA and Aritaum.

Along with informative programs about self-diagnosis and free counseling for breast cancer, entertainment was also prepared for participants. The “Pink Generation,” a team composed of ordinary volunteers, installed a large pink ribbon and performed a song to wish for the full recovery of breast cancer patients. Prof. Kim Sung-min of Duksung Women’s University also presented artwork associated with the pink ribbon symbol.

Actor Song Jae-rim and actress Lim Ji-yeon, the official models for brands Laneige and HANYUL, respectively, also attended the ceremony to show support for the campaign and its message.

The Pink Ribbon Campaign started in 2000 as a way to give back the support AmorePacific has received from its female customers. That year, AmorePacific invested in the establishment of the Korea Breast Cancer Foundation, the first public foundation in Korea for breast cancer. In its first 14 years, around 460,000 people have participated in the Pink Ribbon Campaign, making it into one of the most prominent women’s health campaigns in South Korea.

To celebrate its 15th birthday this year, AmorePacific and KBCF announced the new slogan ”Pink Ribbon, Always” to show its commitment to its role in evoking public awareness of breast cancer.

The Pink Ribbon Love Marathon, the biggest public event in AmorePacific’s Pink Ribbon Campaign, not only provides useful information on breast health, but also donates every penny of the profits earned from the marathon - including sponsor donations and AmorePacific’s matching fund - to KBCF. Between 2001 and 2014, the Pink Ribbon Love Marathon gathered 254,000 contestants and donations of over 2.6 billion won ($2.3 million). As a result, KBCF was able to pay for the surgeries of 780 low-income breast cancer patients and more than 700 information sessions concerning breast health.

Established in 1945, AmorePacific has a long and successful history in the makeup and green tea industries in South Korea. In response to the affection and trust it has received from customers, AmorePacific has organized numerous social programs and become a model for other domestic companies. Under the slogan “Beautiful People, Better Tomorrow,” the company has oriented much of their business strategy around the idea of giving. The Pink Ribbon Campaign is one example of that and shows AmorePacific’s will to meet the standards of responsibility expected from an industry-leading company.

Donations and social contributions have been a part of AmorePacific’s corporate culture from the beginning and will continue into the future.